Invasion of the Nones 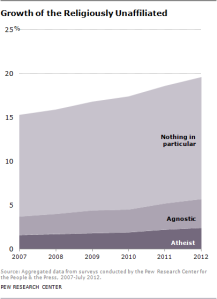 From 2012: The Pew Research Center reported an increase of Americans who have no religious affiliation.   Some of these “nones” are atheists, some are agnostics, but many are folks who simply prefer to “roll” their own religion. Is this an alarming trend?

I started blogging seven years ago. The biggest trend I have seen in those seven years is the startling rise of the “nones” in America, those who say they have no particular “religious preference,” whenever polls are conducted. I call it the “Invasion of the Nones.”

In 2012, the Pew Research Center reported that the number of Americans who have no religious affiliation had grown to its highest percentage ever of the American population. One in five Americans marked “None” on questionnaires when asked about religious belief or association with a church. Over the previous five years, prior to 2012, the number of “nones” had increased from 15% to 20%…. and these are not ladies wearing black dresses with white trimming.

Subsequent research has shown that the growth of Protestant evangelical Christians; that is, those who hold to a high view of Scripture, as the written Word of God, has pretty much remained stable, during this time frame. But the latest 2019 Pew Research study shows that the American culture, more broadly speaking, is growing less and less Christian, with every passing year.

What is the takeaway from this latest research? While the percentage of Protestant evangelical Christians continues to be pretty much the same, adherents to more nominal forms of Christian faith, among certain Protestants and Roman Catholics is dropping rapidly. Another way of putting it is this: mainline liberal Christianity, in particular, Protestant mainline Christianity, is in steep decline.

I find it helpful to take the long view and consult some church history, with respect to these type of statistics. They did not have public opinion polls a few hundred years ago, so sociologists and historians often come up with varying numbers. Nevertheless, there is much to consider.

Looking back into the colonial period, sociologists Roger Finke and Rodney Starke argue in the Churching of America that “religious adherence” has enjoyed a long period of sustained increase. Church affiliation of some kind today is significant for about 6 out of every 10 people. But contrary to much popular belief, and despite the fact that most of the original thirteen colonies explicitly promoted Christian faith, our colonial forefathers were generally not involved much in church life, When America was founded as an independent nation in the 1770s, only one in five Americans were involved in any kind of church.

However, some find that even this early American figure is optimistic. A few years ago, I recall historian Mark Noll pointing out that only about  10% of the population attended a church during the period from the Revolutionary War to the 1790s.

Wow. We have come a long way since then.  If you put that in perspective, the situation now does not look so bad.

However, Starke and others contend that the growth trend for “religious adherence” has leveled off in recent decades. Other scholars say that the problem is actually worse. For example, I highlighted the contribution of former Mormon and late historian Grant Palmer in another Veracity post regarding Mormon history. Palmer has argued that in the year 1800, only 7% of Americans were going to church. It was not until the Second Great Awakening of the early 19th century and the explosive growth of the Methodist movement before Americans would become predominantly a church-going people. By the eve of the Civil War in 1861, about 61% of Americans were involved in church life. Palmer goes on to observe that this percentage has been in a slow decline ever since. For Palmer, the trend even appears to be accelerating over the past ten to twenty years. This trend appears to be in perfect sync with the rise of the Internet, in particular, with the pervasive influence of social media. As Palmer puts it, “the Internet is killing organized religion“.

What can we learn from all this?

Clarke Morledge -- Computer Network Engineer, College of William and Mary... I hiked the Mount of the Holy Cross, one of the famous Colorado Fourteeners, with some friends in July, 2012. My buddy, Mike Scott, snapped this photo of me on the summit. END_OF_DOCUMENT_TOKEN_TO_BE_REPLACED
This entry was posted on Monday, October 21st, 2019 at 6:00 pm and tagged with pew research and posted in Apologetics. You can follow any responses to this entry through the RSS 2.0 feed.
« Indelible Grace: God Himself (by Matthew Smith)
What is a Christian Conscience? »

6 responses to “Invasion of the Nones”