Resources on the Complementarian vs. Egalitarian Discussion

18 in a multipart series.

Long before the current debates regarding sexual ethics and gender identity (think same-sex marriage, transgender, etc.) overwhelmed the cultural discussion, evangelical Christians have been embroiled in debates over “women in ministry” in the church. 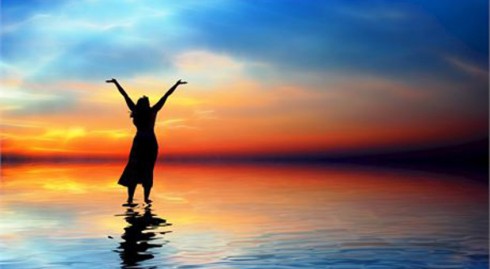 Since as early as the English Quakers of the 17th century, and more recently, with groups like the Salvation Army, Free Methodists, and Nazarenes, starting around the late 19th century, some evangelical Christians have been ordaining women to the office of elder and/or pastor. However, this practice was largely outside of the evangelical mainstream, the peculiar quirks of particular groups. It has only been within the past 50 years, that the egalitarian vision of men and women, ministering in all levels of church leadership, went mainstream.

In the 1970s, Letha Scanzoni and Nancy Hardesty wrote their landmark book All We’re Meant to Be: Biblical Feminism for Today. Scanzoni, a graduate of Moody Bible Institute, and Hardesty, a graduate of Wheaton College, both institutions of higher learning in the evangelical heartlands of the American Midwest, made their case that women should be accepted as pastors and elders in evangelical churches. Together, the two helped to found the Evangelical Women’s Caucus, a movement that attempted to spread the cause of women serving in all levels of leadership in evangelical churches (Here is an interview with Letha Scanzoni, reviewing her life’s work).

However, the comprehensive union supporting the Caucus eventually collapsed over disputes regarding the prospect of permitting same-sex marriages in evangelical churches, and the conflict over biblical inerrancy. The more conservative of the two sides, that rejected same-sex relations, in any form, became the leading intellectual wing that led to the formation of the Willow Creek Association. Willow Creek remains one of evangelicalism’s largest and most influential egalitarian churches. The heirs of this more conservative movement helped to form Christians for Biblical Equality, that remains the premier evangelical intellectual resource for supporting an egalitarian interpretation of Scripture, within a biblical inerrancy framework.

A united response to the growing egalitarian movement was met by Crossway’s publication of Recovering Biblical Manhood and Womanhood: A Response to Evangelical Feminism, in 1991, edited by Wayne Grudem, then a professor at Trinity Evangelical Divinity School, and John Piper, a Minneapolis pastor and founder of Desiring God ministries. Grudem and Piper had worked with a team a like-minded pastors and scholars that forged the Danvers Statement, that served as the backbone for the Council on Biblical Manhood and Womanhood, the premier evangelical resource for supporting a complementarian interpretation of Scripture, within a biblical inerrancy framework. 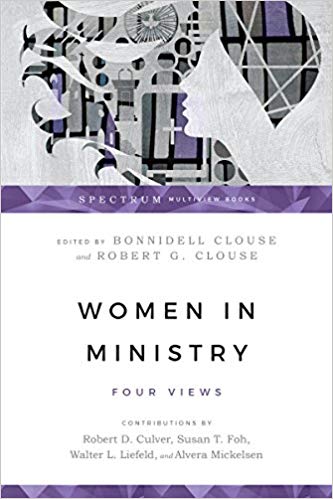 The timing of the founding of the Council on Biblical Manhood and Womanhood roughly coincided with the IVP publication of Women in Ministry: Four Views. This book entertained the writings of four evangelical scholars offering different perspectives on the topic at hand.

At the risk of oversimplifying their positions, Robert Culver wrote defending a traditional view, namely that women should not serve in positions of church leadership, basically assuming that women are more easily deceived than men. Susan T. Foh wrote defending a male-leadership view, a more nuanced re-evaluation of Culver’s view, that essentially summarizes the most common complementarian view promoted by the Council on Biblical Manhood and Womanhood. For Foh, women are equal in intelligence, competence, and spiritual status as men, but they are not equal in terms of function, and women are not to serve as elders or pastors in a local church. Walter Liefield wrote about a plural-ministry view, that effectively eliminates the gap between clergy and laity, thus making any distinction between men and women in church leadership, largely irrelevant. For Liefield, church leadership has essentially a utilitarian or practical function. It is all about getting the job done. Alvera Mickelson defended what is known to be the contemporary egalitarian view, affirming the role of women as pastors and elders, empowered to extend spiritual authority over a local congregation.

The strength of Women in Ministry: Four Views matches with its weakness. The book manages to describe the complexity of the debate, as not simply being about the role of men and women in church leadership, but it also highlights the complex nature of how church leadership itself should be constructed at the local level, in the first place. Yet the book risks being overly complex, in the presentation of the arguments. However, the greatest deficiency of the book is that it is dated. More recent scholarship has largely found a few elements of the arguments, being advanced by each school of thought, represented in the book, to be problematic. 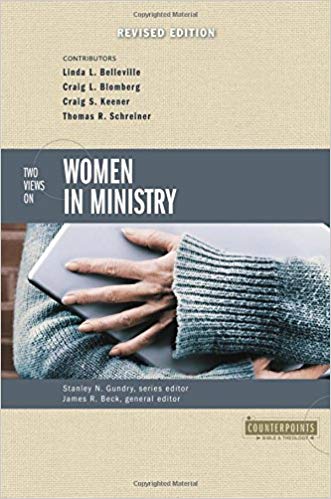 A more recent study, that is backed by more current scholarship, is the second edition of Two Views on Women in Ministry (Counterpoints: Bible and Theology), published in 2005, by Zondervan. Two Views is a more mature presentation of the arguments, in comparison to the more extreme viewpoints presented in Women in Ministry: Four Views. In Two Views, Linda Belleville and Craig Keener offer nuanced perspectives supporting an egalitarian view, balanced against the essays by Craig Blomberg and Tom Schreiner, who offer nuanced perspectives supporting a complementarian view.

Two Views offers comparatively little difference between Belleville and Keener, in their egalitarian views. With respect to the complementarian views of Blomberg and Schreiner, Schreiner is the more rigorous, objecting to the practice of having women teach from a Sunday morning pulpit, or even in adult Bible classes. Blomberg, on the other hand, would allow for women to deliver sermons on an occasional, irregular basis, and allow for women teaching in adult Bible classes, at times. However, the primary functions of elder and pastor, the “highest office” in the local church, is reserved to be done by men only. In my reading of Two Views, it would appear that both Blomberg and Schreiner might allow for women to serve in a pastoral role, on a temporary basis, assuming there were no qualified men present to lead. But this would be a rare case, not sufficient to establish as a norm. 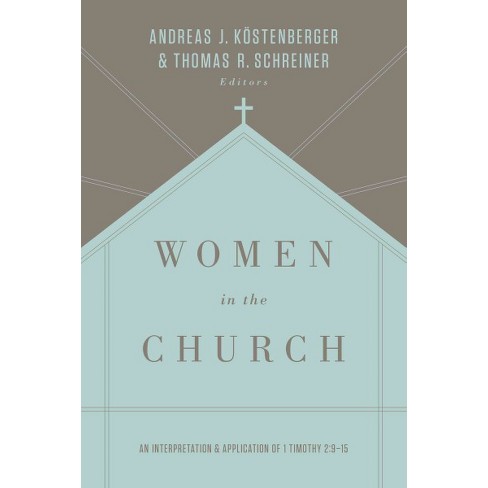 One of the best recent directive studies of Scripture, from a complementarian perspective, is the third edition of Women in the Church: An Interpretation and Application of 1 Timothy 2:9-13, edited by Andreas J. Köstenberger and Thomas R. Schreiner. Women in the Church focuses on the most contentious passage of 1 Timothy 2:8-13, in the current debate, and it takes to task the claim made by egalitarian scholars that the Apostle Paul was trying to address a particular local, cultural situation in the church of Ephesus, in his letter to Timothy, when he forbids a woman from teaching and/or having authority over a man, in the corporate structure of church leadership. The contributors of this book make the case that Paul’s teaching about women and men in 1 Timothy in church office is timeless and transcends cultures. Egalitarian scholars who wish to make their alternate case must contend with the evidence presented in Women in the Church. 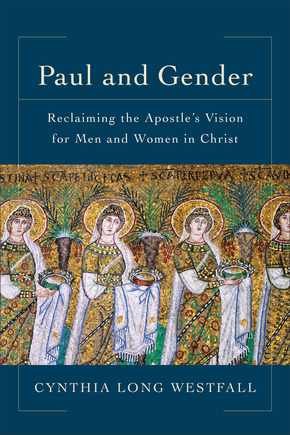 In contrast, one of best recent studies from an egalitarian perspective is Paul and Gender: Reclaiming the Apostle’s Vision for Men and Women in Christ, by Cynthia Long Westfall. Westfall is a New Testament Greek scholar, who served on the editorial board for the Common English Bible. Westfall offers a fresh egalitarian reading of the relevant texts. In particular, Westfall makes the most helpful observation that the symbol of the veil, in 1 Corinthians 11, is much more profound than what most scholars and pastors realize.  In this passage, Paul insists that women should pray and prophecy, in worship services, with their heads covered. While this might be understand as a sign of submission of women to the authority of men, this interpretation does not fully grasp the larger radical force of what Paul was trying to convey.

Recent research indicates that married women in Ephesus, as elsewhere in the Roman Empire, were to wear veils, to signify that they were married. But this was meant to convey the idea that these particular women were not sexually available to other men. Contrast this with the status of female slaves in the Roman Empire. They were not allowed to wear veils, as they were subject to their masters. Without a head covering, it signaled to others that a female slave was sexually available to other men. Paul, on the other hand, in Westfall’s understanding, directs ALL women to wear the veil, as a sign that they were protected from exploitation. Paul was being counter-cultural in Corinth. In other words, Paul sees the wearing of the veil as an honor, for it demonstrated to vulnerable women, that through the Gospel, women are protected by Christ from exploitation. Complementarians would greatly benefit from this quality of egalitarian scholarship offered by Westfall.

A few “honorable mentions” include some books that I have not fully read, but that contain some really useful material. Catherine Clark Kroeger and Richard Clark Kroeger, who were instrumental in founding Christians for Biblical Equality, wrote the influential 1988 book, I Suffer Not a Woman: Rethinking 1 Timothy 2:11-15 In Light of Ancient Evidence. This is a very challenging book, but the Women in the Church volume by Köstenberger and Schreiner, mentioned above, serves as a useful rejoinder to the Kroegers, that critically examines the Kroegers’ claims.

Then there is Hannah Anderson’s Made for More, a recent book, accessible to the average Christian reader, that argues that before complementarians press their case for male and female “roles,” they need to consider what it means to be created in the image of God. I find this to be a bridge builder book between complementarians and egalitarians.

Much of the technical arguments advanced in the more academic books above assume at least some knowledge of New Testament Greek, which is unfortunate for someone like me who has had no formal training in the biblical languages. But the nature of the debate is technical, as it has a significant bearing on how Bible translation is done.

There are many dozens and dozens of books that address topics related to the complementarian vs. egalitarian debate. In the blog series that I developed, I looked to several of the above resources to develop the material in the blog, as I believe these are the cream of the crop. I recommend that interested readers consult these books and referenced websites for further information, useful for further biblical study.

Clarke Morledge -- Computer Network Engineer, College of William and Mary... I hiked the Mount of the Holy Cross, one of the famous Colorado Fourteeners, with some friends in July, 2012. My buddy, Mike Scott, snapped this photo of me on the summit. END_OF_DOCUMENT_TOKEN_TO_BE_REPLACED
This entry was posted on Sunday, April 7th, 2019 at 8:41 am and tagged with complementarian, egalitarian, women in ministry and posted in Topics. You can follow any responses to this entry through the RSS 2.0 feed.
« A Modest Proposal to Make Peace Between Complementarians & Egalitarians
An Interdenominational Church Asks: What Are the Core Doctrines of the Faith? »

One response to “Resources on the Complementarian vs. Egalitarian Discussion”