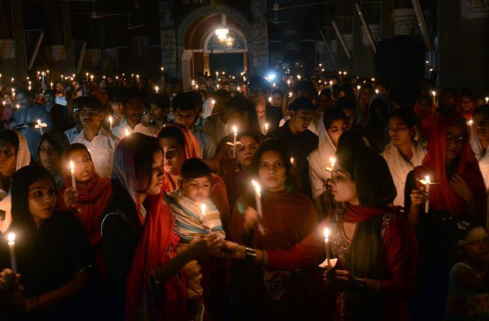 Pakistani Christian worshipers during an Easter Mass in Lahore, 2015. PHOTO: LIGHTROCKET/GETTY IMAGES (as in the Wall Street Journal article)

Several Veracity readers came to me on Easter Sunday and asked me about a recent Wall Street Journal article, “The Easter Effect and How it Changed the World” (behind a paywall), by a Catholic intellectual, George Weigel. Weigel’s argument is that the event of Christ’s resurrection, so inspired, so disturbed, and so invigorated the world of the Roman empire, that it eventually led to Christianity’s effectively taking over the Mediterranean basin within just a few centuries. Weigel published a briefer essay along the same lines in the journal First Things in 2016  (no paywall).

In the First Things essay, I disagree with Weigel’s judgment that the popularity of the New Atheism of the likes of Richard Dawkins has “just about expired.” I only see the trend continuing to erode the cultural landscape, though in a more subdued manner, until the church recaptures the imagination of the “Easter effect.” This caveat aside, I recommend Weigel’s thoughts to you.

If you are interested in this theme, of how the “Easter Effect” radically changed the world, even to the present day, you can explore this idea in a couple of books that treat this topic in-depth. Weigel was partly inspired by the work of Baylor University sociologist, Rodney Stark, in his 2012 The Triumph of Christianity: How the Jesus Movement Became the World’s Largest Religion. You can read a review of the book by Scott Wenig, of Denver Seminary.

In a similar vein, the infamously skeptical, UNC Chapel Hill scholar Bart Ehrman recently released The Triumph of Christianity: How a Forbidden Religion Swept the World. What is remarkable about Ehrman’s book is that even though he is decidedly an agnostic, he nevertheless finds the impact of the claims to Christ’s Resurrection to be of tremendous historical significance. So, even though Ehrman does not believe the Resurrection to be true, he admits that something indeed happened, following Jesus’ death, that led to the radical transformation of the Roman empire. Charlotte’s Reformed Theological Seminary president, Michael Kruger, reviews Ehrman’s book.

Clarke Morledge -- Computer Network Engineer, College of William and Mary... I hiked the Mount of the Holy Cross, one of the famous Colorado Fourteeners, with some friends in July, 2012. My buddy, Mike Scott, snapped this photo of me on the summit. END_OF_DOCUMENT_TOKEN_TO_BE_REPLACED
This entry was posted on Monday, April 2nd, 2018 at 7:59 am and tagged with Bart Ehrman, easter effect, george weigel, Rodney Stark and posted in Topics. You can follow any responses to this entry through the RSS 2.0 feed.
« Resurrection Day!!
MLK: I Have Been to the Mountaintop »