As we remember the 500th anniversary of Martin Luther’s nailing of his Ninety-Five Theses, to the Wittenberg church door, we must not forget the contribution of Desiderius Erasmus of Rotterdam. Without Erasmus’ breakthrough in the study of the New Testament, Luther’s protest against indulgences might never have happened.

Erasmus, an illegitimate son of a Dutch priest, was a well educated young man, when his mother died. His guardians stole his inheritance, and thus, poverty forced him to enter monastic life.  It was a terrible experience, and he hated being a monk.

Historian Diarmaid MacCulloch believes that Erasmus had a same-sex, physical attraction to a fellow monk, and the frustration and moral anguish that this caused, prompted him to find some way out of the monastery. Erasmus was unusually gifted with languages, and he was able to receive a special papal dispensation, to relieve him from his monastic vows. Instead, he was able to focus all of his energies as a single man into scholarship. He became an author, widely read throughout Europe, largely due to the new invention of movable type in printing.

Adagia (1500) was a collection of ancient Latin and Greek proverbs, including memorable phrases like “to walk the tightrope,” “a necessary evil,” and “to sleep on it.” In Praise of Folly (1511) was an attack on superstitious religiosity among medieval Europeans, satirically describing various excesses of the veneration of saints and Mary, and the bizarre collections of relics. For example, did milk really ooze out of the marbled, statued breasts of the Holy Virgin, in shrines across Europe? Erasmus contemptuously thought this to be utterly ridiculous. 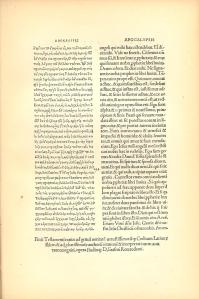 The last page of Erasmus’ Greek New Testament. The Dutch scholar had no Greek access to the last six verses in the final chapter or Revelation, so he had to back-translate those verses from the Latin into the Greek.

Erasmus considered himself to be a humanist scholar, in the sense of wanting to recover the classics. In those days, humanism was a Christian movement. The humanist mantra during this medieval period was the Latin, ad fontes, or “back to the sources.” Erasmus’ greatest achievement, with respect to the coming Protestant Reformation, was his work on developing an authoritative Greek text of the New Testament.

Prior to the age of Erasmus, the ancient Greek sources standing behind the official Latin translation of the Bible for Western Christians, the Vulgate, were obscured in complete disarray. A Spanish project to reconstruct the original text of the Bible, the Complutensian Polyglot Bible, was underway, and it inspired Erasmus to work on the New Testament. Delays in the Spanish project soon gave Erasmus the opportunity to step forward, and make his mark on history.

When he completed the first edition of Novum Instrumentum omne (1516), it became a best seller among scholars all throughout Europe. Erasmus’ work, through successive editions, was pioneering in the field of textual criticism, the study of the original text of the Bible. Novum Instrumentum omne became the basis for the textus receptus, the Greek text that nearly a century later guided the King James Version translators for the English Bible.

What jolted scholars is that Erasmus’ Greek text revealed that various errors had crept into the official Latin Vulgate. Some of these errors that Erasmus exposed had potentially explosive theological implications. Here is a sample:

The inwardly conflicted, German theology professor, Martin Luther, bought his copy of Erasmus’ work, shortly after it was published. Luther was immediately amazed and absorbed the work of the Dutch humanist. The lack of a clear theology from the Bible, to support the medieval practice of granting indulgences, stood out for Martin Luther. For if “doing penance” was central to the doctrine of indulgences, and “do penance” was not in the Bible, as Erasmus showed in Matthew 4:17, then the theology of Rome was in serious trouble. By the end of the following year, 1517, Luther’s protest against the “sale of indulgences” would spark the beginnings of the Protestant Reformation.

However, despite Luther’s debt to the work of Erasmus, the great scholar of the Netherlands would never go as far as Luther did in seeking reforms within the medieval church. Luther soon came to believe that the entire edifice of Papal Rome’s theology was built on a crumbling foundation, contrary to the teaching of Scripture. Erasmus, on the other hand, only believed that the actual practices of Christian piety, as derived from the Roman church, were being abused. He did not think that the undergirding theology of the Church had been corrupted.

Some had their suspicions of Erasmus, but throughout his whole life, this influential scholar remained in good standing with the church of Rome, despite his criticisms of excesses in various devotional practices. Erasmus would never embrace the revolutionary spirit of a Martin Luther.

Erasmus eventually came into head to head conflict with Martin Luther over the issue of predestination, Erasmus affirming a higher place for human free will, in cooperating with the grace of God, than what Luther would allow. But the Wittenberg reformer severely rebuked the Dutch humanist, thus breaking the cordiality of their relationship.

But it is difficult to imagine how Martin Luther might have gone as far as he did, without the scholarly work of Erasmus to support him. For that reason, Erasmus remains a central figure in the history of the 16th century Reformation, one of the greatest Bible scholars in the history of the Christian movement. That is pretty remarkable for someone, born out of wedlock, who was cheated out of his inheritance, and who wrestled with same-sex desire.

Clarke Morledge -- Computer Network Engineer, College of William and Mary... I hiked the Mount of the Holy Cross, one of the famous Colorado Fourteeners, with some friends in July, 2012. My buddy, Mike Scott, snapped this photo of me on the summit. END_OF_DOCUMENT_TOKEN_TO_BE_REPLACED
This entry was posted on Thursday, October 19th, 2017 at 6:32 pm and tagged with erasmus, Protestant Reformation, reformation, textual criticism and posted in Topics. You can follow any responses to this entry through the RSS 2.0 feed.
« Our Lady of Kibeho
What Was the Reformation All About? (In Three Minutes) »