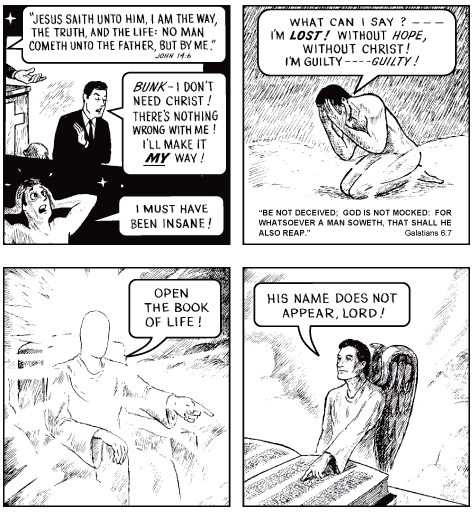 Jack Chick, fundamentalist cartoonist, died at age 92, on October 23, 2016. His most popular comic book tract was This Was Your Life, viewable in full at www.chick.com, though I have included a few pages here. Jack Chick and the popular obsession with fear at Halloween have a lot in common .

I read my first “Chick tract” at a highway rest stop on Interstate 95 as a teenager. A middle-aged gentleman handed me this small comic book, spoke a few words, and before I could glance at what he gave me, the man quickly walked away. It was Jack Chick’s tract, This Was Your Life. I was already a follower of Christ, but what I read disturbed me, in more ways than one.

In one sense, Jack Chick was right. Before the scene shown above, a man who lived his life indifferent to the things of God, dies. Then this dead man was brought before the judgment seat, having his entire life exposed before the Lord, like on a theatre screen display. The hidden things were brought to light, demonstrating that his life, lived apart from Christ, had negative eternal consequences. He thought he could “get away with” sinful thoughts and actions in his life, thinking no one would notice, when in reality, nothing escapes the notice of God.

It is a terrifying thought.

Jack Chick was all about the “turn-or-burn,” “repent-or-be-sent” style of confrontational evangelism. No one did it better than Jack Chick. Chick tracts bring up difficult topics, like eternal judgment, that many, less confrontational-minded Christians, like myself, I confess, tend to avoid like the plague. So, I have to respect Jack Chick for being direct. He never beat around the bush. He always got right to the point. He always made you think, and I have to like that about him.

Nevertheless, it does not take long for Jack Chick to lose it for me. The theology that Jack Chick presented in this tract is rather skewed. In the first two frames above, as the man reflects upon his life and his unworthiness, it would appear that the man has contrition and sorrow for his sins. However, his name is not found in the “Book of Life.” But is this message correctly aligned with Scripture? If the man is indeed repentant, assuming he truly is repentant, why is his name not found in the “Book of Life?”

There are at least two problems here: Why would we think that someone who is far away from God in this earthly life, would then suddenly have a change of heart in the next life (Luke 16:19-31)? Furthermore, even if someone accepts the possibility of repentance after death, a purely speculatively notion, with very little, if any, Biblical support, it seems odd that God would then cast him into hell anyway (1 Timothy 2:3-4).

Kind of sadistic, if you ask me. 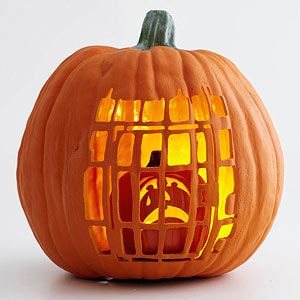 What scares you this Halloween?:  Afraid of what terrible things God might do to you, or afraid of missing out on discovering who God created you to be? It makes a difference.

There is something about Halloween that brings out a bizarre fascination with fear among some people, and much of the same can be said about Jack Chick tract theology. Ultimately, the problem with a number of Jack Chick tracts is that they cultivate an attitude of paranoid fear when it comes to salvation. Heaven becomes nothing more than a way to obtain spiritual “fire insurance.” People desire to “accept Christ,” not because they have a desire to have intimate fellowship with a loving, holy God, but rather, they are motivated by self-interest, seeking to avoid the fires of hell at all costs. An attempt to relieve heavy-handed, legalistic guilt plays a role for others. Once they get their salvation “guarantee,” they breath a sigh of relief, and move onto something else in life. In Jack Chick’s theology, eternity sometimes comes across more like a “haunted house” experience, all by yourself, at Halloween. You get brought to the very edge of your fears, only to realize the cartoonish, manipulative nature of those fears, and then you have a great laugh when it is all over. In fairness, Jack Chick did include a positive message about salvation in Christ in his tracts, but sadly, his vision of scaring people to death regarding hell tended to overshadow everything else.

To me, that type of misguided theology is more scary than anything else I can think of at Halloween. It distorts our view of God, our view of His judgment, and our understanding of the Gospel.

Please understand me. Tract evangelism has its place, and I have known of folks who read a Chick tract at the right time in the right place in their life, and it made all of the difference in eternity. God uses a variety of means to reach us, even when some of our initial theology is off-course. But once tract evangelism gets taken out of the context of a caring relationship and a vision for long-term discipleship, such a strategy can backfire and cause tremendous harm. Not all “soul-winning” necessarily leads to disciple making. It is a terrible shame, since I sincerely believe that Jack Chick genuinely wanted people to come to know Jesus.

Jack Chick wrote the most famous anti-evolution track in the world, Big Daddy? (Viewable at www.chick.com), a collaborative effort with Kent Hovind, who is embarrassingly controversial even among Young Earth Creationists. Neanderthals never existed?? WOW. Ken Ham would never go for that. For an evolutionary creationist critique of Jack Chick’s tract, you can read this analysis at the Letters to Creationists blog.

As ChristianityToday recalls in their fascinating, short remembrance, Jack Chick went into doing comic cartoons for evangelism because he was naturally shy. Yet Jack Chick often was over the top, embodying “fundamentalism” at its most stereotypical. He was a fierce King James Only Bible advocate, condemning all modern Bible translations as demonic, and he latched onto just about any and every anti-Catholic conspiracy theory you can think of (68 million victims during the Catholic Inquisition, and “You can’t prove it! There is no evidence…anymore.” Where did Jack Chick get his source for “68 million victims,” if there is no evidence?). In many ways, Jack Chick represented some of the best and worst of conservative evangelical faith and culture; the best, in terms of a love for the Bible and a desire for souls to be won for the Lord; and the worst, in terms of promoting uncritically researched half-truths, warped theology, and endless kooky conspiracy theories, all that make a mockery of Christian credibility.

In his tract, The Treat (viewable online), Chick even took on Halloween itself, fanning the flames of overly exaggerated tales of human sacrifices, the supposed “pagan origins” of Halloween, and kids choking on razor blades in candy. If only more Christians knew the correct history behind Halloween, as evangelical historian Beth Allison Barr informs us!

Among cartoonists, Jack Chick was ironically a beloved cultural icon and original artist, particularly in the world of underground comics. In 2003, it was reported that Jack T. Chick was the world’s most published living author. Jack Chick was often condemned for promoting “hate speech,” but when I Googled around the web and social media for his name this week, I saw a lot of hatred directed his way, particularly among the now disenchanted who grew up in fundamentalist homes.

This Halloween, I am not planning on dropping a “Chick tract” in any kid’s candy bag. But at least I take to heart something Jack Chick left in his biography that challenges me. It challenges me to prayerfully have a desire that my friends and neighbors come to know the Lord Jesus… but to do it in a winsome way, faithful to the truth. It challenges me not to beat around the bush, and to take my own relationship with Christ more seriously. Upon seeing a group of teens one day on the sidewalk, Jack Chick remembered this:

“At the time, I didn’t like teenagers or their rebellion. But, all of a sudden, the power of God hit me and my heart broke and I was overcome with the realization that these teens were probably on their way to hell. With tears pouring down my face, I pulled my car off the road and wrote as fast as I could, as God poured the story into my mind.”

Yes, his message and methods were often a terrible mess. But when it came to having a sense of compassion for the lost, at least I can say that he got that right.

Clarke Morledge -- Computer Network Engineer, College of William and Mary... I hiked the Mount of the Holy Cross, one of the famous Colorado Fourteeners, with some friends in July, 2012. My buddy, Mike Scott, snapped this photo of me on the summit. END_OF_DOCUMENT_TOKEN_TO_BE_REPLACED
This entry was posted on Friday, October 28th, 2016 at 8:42 pm and tagged with Evolution, halloween, Heaven, Hell, jack chick and posted in Apologetics. You can follow any responses to this entry through the RSS 2.0 feed.
« Kirk Cameron’s Revive Us National Family Meeting
Why the Reformation (Still) Matters »

One response to “Jack Chick and the Real Halloween Scare”