Who is the AntiChrist? 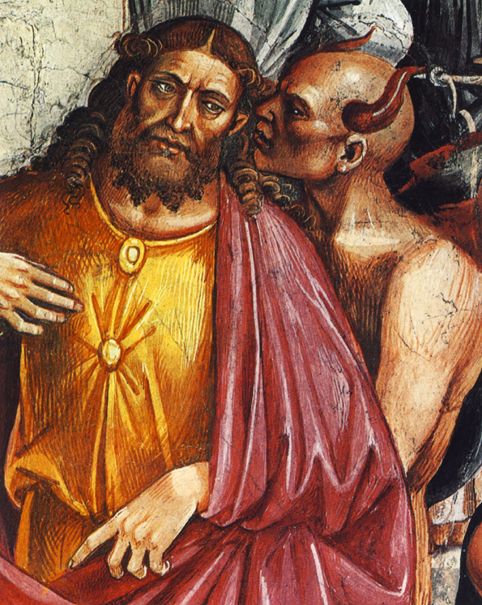 Luca Signorelli. The Deeds of the Antichrist (1499-1504). Signorelli portrays the devil counseling the Antichrist. With an American Presidential election coming around the corner, I wonder who so-called “prophecy experts” might pick as the one and only Antichrist in our day?

So, who exactly is “the” antichrist?

Back in high school, I knew someone who was convinced that President Jimmy Carter was the antichrist. Carter was a very convincing orator in the 1970s, connecting extremely well with voters frustrated with the then current political situation. Carter even said that he was a “born again” Christian. But by negotiating a peace treaty in the Middle East between Israel and her enemies, was Carter fulfilling the prophecy of Daniel 9:27, the antichrist who would “confirm the covenant with many?”

Okay, let us fast-forward some 35 plus years. He may not have been the best President we have ever had…. but the antichrist?

A lot of people speculate on who this antichrist might be. From military dictators to American presidents, the list of possible candidates seems about as endless as the human imagination (some folks even vote for their favorite picks). Most people get their information about the antichrist from books, movies, late-night cable TV, neighbors and friends.

But how many people know what the Bible actually teaches about the antichrist?  You might be surprised to discover that a lot of popular ideas about antichrist owe more to overly fertile imaginations than the clear teaching of Scripture.

The Antichrist in Holy Scripture

Being a controversial subject, different Christians disagree as to the exact nature of “the” antichrist. As it turns out, the Bible leaves a lot of open questions regarding “the” antichrist. Many people mistakenly think that the term “antichrist” is found all over the pages of the various prophecy books in the Bible, such as the New Testament Book of Revelation or the Old Testament Book of Daniel. It is true that different, reputable scholars have made very compelling cases that there is an implicit theme regarding antichrist throughout the pages of Scripture, which we will explore in a moment. But what about the explicit references to antichrist?

These are the clearest references to antichrist in the Bible. There is a lot here in these verses that teach truth about the nature of antichrist, while still raising some interesting questions:

But what about the rest of the Bible? Do we not find other references to antichrist in other places that are more implicit in nature?

Ah, this is the controversial nature of “the” antichrist.

Other Possible References to Antichrist in Scripture

There are plenty of other characters in the Bible that share many of the same markers of antichrist as found in the letters of John. For example, there is the “man of lawlessness” in 2 Thessalonians 2:1-10. There is also the beast in the Book of Revelation, such as Rev. 13:11-17 and 16:13-14, and so on. Many fine Bible scholars demonstrate that there are practically dozens of other passages with similarities to antichrist. You may conclude that such matches with other figures in Scripture are convincing. Fair enough.

Nevertheless, these methods of interpreting the Bible are still hotly debated. A number of Bible prophecy students, particularly from the dispensationalist wing of the church, would contend that the culmination of all of these various passages woven together would indicate the future coming of one particular individual who will stand out as “the” antichrist. But not everyone agrees with that. For example, is there sufficient evidence to directly link antichrist in John’s letters with the beast in John’s Revelation? Some would clearly say yes, but others would say no. Furthermore, is this antichrist necessarily an individual, or could it instead be a power or a movement? Could it be both?

It makes sense to try to figure out how antichrist might be related to other, similar looking characters, such as the “little horn” in Daniel 7. Doing so enables students of Bible prophecy identify how things we read in the Scriptural text connect with one other. The problem is that some of these connections rely on assumptions that can be difficult to prove…. or disprove!

One big question that puzzles students of Bible prophecy is figuring out the relationship between the reality of antichrist within the Apostle John’s knowledge and experience in the first century and any future antichrist who “is coming” in the “last hour.” So while there are some things about antichrist that are reasonably clear from the Bible, the presence of such ambiguity in the text should give us some caution and pause when we hear people coming up with their own theories of who they think the(???) antichrist is or might be in our present day, particularly if they seemed absolutely convinced that they are right. A little skepticism might be in order!

So Then, What Can Be Confidently Known About Antichrist?

Whether or not you believe there is some future particular antichrist out there in the future, that can or can not be known ahead of time, there should be some things we can all agree on as we read the pages of the Bible. A more modest approach would be to think that the spirit of antichrist, of those who deny the true identity of Jesus Christ, is a spirit that has continued to battle against the Truth of God in each and every generation of the church, whether or not there really is some specific antichrist individual out there somewhere along the horizon. There have been many antichrists who seek to resist the message of the Gospel, and who will continue to do so. You may have antichrists as neighbors, coworkers, and even members of your own family.

May God be calling you to be a witness in those dark places? Does your life point towards the reality of the True Christ? It remains a challenge for all believers to be faithful and to pray that they might stand up for the Truth of the Gospel in a world that seeks to deny that Truth.

The bottom line is that no matter what your view is regarding the nature of antichrist or “the” antichrist, our understanding must be rooted in Scripture and not the fashions of popular opinion.

In February, 2015, this “correction” showed up in a North Carolina newspaper. I am so glad we finally got this story straight, aren’t you??…. Well, I guess with President Obama’s term coming to a close, I suppose his chances of remaining a viable “antichrist” candidate are becoming slim anyway.

Before the American Revolution, a large majority of Christians in the American colonies believed that the Roman Catholic Pope was the antichrist, owing to the 1646 version of the Westminster Confession. But J. V. Fesko, an historian of the Puritans, notes that the reference to the Pope as antichrist was removed from the Westminster Confession in 1789, by American Presbyterians.

There is just a whole lot of nutty stuff out there on the Internet regarding the identity of the antichrist, but I thought I would dig up some fairly safe bets on the less extreme views held today by Christians.

Mark Hitchcock, an Oklahoma pastor and adjunct professor at Dallas Theological Seminary, and author of such books as Is the Antichrist Alive Today? and Blood Moons Rising, gives a helpful introduction in the following two short clips to a common dispensationalist understanding of who the antichrist is. Hitchcock believes in the future coming of a singular, individual antichrist figure. Yet Hitchcock believes that attempts to absolutely identify the antichrist in contemporary society are unwarranted and unbiblical. We will only know of the identity of the antichrist after he has established his rule. In the meantime, we should be focused on being witnesses for Jesus and not get sidetracked by needless prophetic speculation. Hitchcock is a sober, well-informed voice that needs to be heard among many who get off track.

An alternative perspective that is critical of the dispensationalist perspective comes from American Vision ministries, led by Gary Demar. Demar is author of the book Last Days Madness: Obsession of the Modern Church, an in-depth examination showing where a dispensationalist approach to bible prophecy might be unfortunately misguided. In the last clip, Demar and ministry partner Joel McDurmon discuss some biblical problems with popular understandings of antichrist, based on an article McDurmon wrote.

You will probably hear or read some perspectives presented here different from your own. But whatever you do, I would hope that you take what you hear and read and then compare it against the standard of God’s Word and come to your own conclusions, through the guidance of the Holy Spirit.

Clarke Morledge -- Computer Network Engineer, College of William and Mary... I hiked the Mount of the Holy Cross, one of the famous Colorado Fourteeners, with some friends in July, 2012. My buddy, Mike Scott, snapped this photo of me on the summit. END_OF_DOCUMENT_TOKEN_TO_BE_REPLACED
This entry was posted on Tuesday, October 18th, 2016 at 8:20 pm and tagged with antichrist, eschatology and posted in Topics. You can follow any responses to this entry through the RSS 2.0 feed.
« Did An Army of 600,000 Israelites Conquer the Land of Canaan?
One Reason Why John Stott’s Stand Against Martyn Lloyd-Jones Mattered »