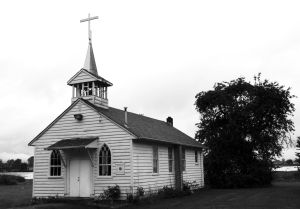 As we discussed in the previous post in this series, the original word for church, the Greek ekklesia, had a secular meaning in first century, Mediterranean society. This sense of an “assembly” or “congregation” of people was given a more theological meaning by the writers of the Bible. But what did that mean?

Many people today assume that the church is essentially the New Testament description of the people of God, which is made of both Jews and Gentiles who worship Jesus. This is often set in contrast with the nation of Israel, which is the Old Testament people of God, who kept the Law of Moses. Others say that there has always been but one people of God, whereby Old Testament Israel was simply an early form of the one church. But a closer look at how the Bible uses ekklesia shows that such assumptions are rather complicated.

For example, while there are numerous examples of the church (Greek, ekklesia) in the New Testament (such as in Romans 16), as Jews and Gentiles worshipping Jesus together, there are exceptions. The first famous martyr of the Christian movement, Stephen, describes the gathering of the Israelites in the wilderness centuries earlier under Moses, as being “in the church in the wilderness,” as Acts 7:38 puts it in the King James Version (KJV). There were clearly no Gentiles in that church!

Again with the KJV, the New Testament writer of Hebrews says that Jesus will sing praise to God in Hebrews 2:12, recalling an Old Testament passage, Psalm 22:22:

The writer of Hebrews has in mind a description of Jews and Gentiles together, as the church. But in a slightly different way, going back to Psalm 22:22 itself, the same word ekklesia, from the first Greek translation of the Bible, namely, the Septuagint, is handled by the KJV differently to describe the worship of the Israelite community, despite it being the same word! No Gentiles here!

“in the midst of the congregation will I praise thee”

Also in the Old Testament, the Greek ekklesia, from the Septuagint translation, can be found to describe the gathering of the Israelite people to come and hear the Lord, in Deuteronomy 4:10. Notice that the KJV translation does not use the English word church, but the Greek ekklesia is the same, though in the verbal form of “gather”:

Specially the day that thou stoodest before the LORD thy God in Horeb, when the LORD said unto me, Gather me the people together, and I will make them hear my words, that they may learn to fear me all the days that they shall live upon the earth, and that they may teach their children.

This trouble, with the word for church, has been the center of a debate for several centuries as to the relationship between Israel, the Old Testament people of God, and the church as the New Testament people of God, where the barrier between Jew and Gentile has been broken down (Ephesians 2:11-21). While it is difficult to establish such a distinction based on the literal interpretation of the words alone, there are two different schools of thought as to how we are to understand these theological concepts of the people of God in both Old and New Testaments:

The debate is a crucial discussion as to how we as Christians are to understand the message of the Bible as a whole. There is a sense that both sides have something important to contribute.

Dispensationalists are concerned to honor the Biblical principle that God has set apart, or elected, the Jewish people, Israel, for a particular purpose, for the benefit of the whole world. This particular purpose for Israel, even to this day, is associated with a set of promises, that are not to be nullified or revoked by the arrival of the New Testament people of God, as Jew and Gentile together.

Covenantalists are concerned to honor the Biblical principle of the oneness of the people of God, whose purpose should not be obscured by ethnic considerations that would otherwise distract us from that fundamental, universal unity. Therefore, Israel, as founded in the Old Testament, finds its fulfillment through the establishment of the New Testament people of God, including both Jew and Gentile, united together by faith in Jesus Christ.

The debate can not be resolved here in this blog post, but an understanding of what church means in the Bible helps us to better appreciate the differences between these two schools of thought among Christians.

Clarke Morledge -- Computer Network Engineer, College of William and Mary... I hiked the Mount of the Holy Cross, one of the famous Colorado Fourteeners, with some friends in July, 2012. My buddy, Mike Scott, snapped this photo of me on the summit. END_OF_DOCUMENT_TOKEN_TO_BE_REPLACED
This entry was posted on Monday, August 15th, 2016 at 6:37 pm and tagged with church, Israel, zionism and posted in Topics. You can follow any responses to this entry through the RSS 2.0 feed.
« What is the “Church?” #1
William and Mary, Confederate Memory, Faith, and the Power of Symbols »