God Dwells Among Us: A Review 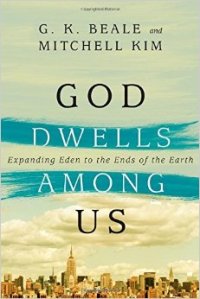 G. K. Beale and Mitchell Kim’s God Dwells Among Us: Expanding Eden to the End of the Earth offers a grand portrait of how the theme of the temple throughout the Bible propels the church forward into mission, as a light to a dark and hurting world.

Have you ever wondered how the whole message of the Bible fits together? Moreover, how does that message impact your life and the mission of the church?

We have sixty-six books in Holy Scripture, and if you have ever read through it all, it can be puzzling to think about how everything fits in with each other. Biblical theologian Gregory Beale and pastor Mitchell Kim have put together a book that helps you gain the big picture of the Bible from Genesis to Revelation, following one theme, one particular thread tying the whole thing together.

God Dwells Among Us: Expanding Eden to the Ends of the Earth is a collection of sermons mainly by Mitchell Kim, based on a more academic work by Gregory Beale, The Temple and the Church’s Mission: A Biblical Theology of the Dwelling Place of God. In condensing and simplifying Beale’s profound work of biblical theology, Kim and Beale take the theme of the temple of God, and trace it beginning from Eden to the last chapters of the Book of Revelation. Kim and Beale’s main thesis is that God’s temple is the dwelling place of God, embodying the presence of God in creation. The temple of God is where we as humans were created to worship God, and that worship catapults the people of God into mission, whereby God’s temple is expanded throughout the whole world.

God Dwells Among Us: Expanding Eden to the Ends of the Earth

I have to be honest here: When the Bible starts talking about things like the temple and the moving tabernacle in the Wilderness, I tend to zone out. There are pages and pages in Scripture where it seems like there are endless descriptions of lampstands, pomegranates, cubits, and ephods. I mean, what is the point of all of this? In our modern, secular culture today, temples are but a relic of a superstitious past. My tendency is to want to skip over these “boring” parts of the Bible and move onto some real action!

In contrast, Kim and Beale paint a rather comprehensive and breathtaking vision of what temple is all about. It begins in Eden, where Adam functions as the first priest. The parallels that Kim and Beale find in the first few chapters of Genesis with the temple language found later in the Old Testament are striking.1 Later, we see how people like Abraham are part of an early type of temple worship, followed by the function of the movable temple, the tabernacle, in the story of Moses and Israel in the desert wilderness. Then we come to the glory of the temple of Solomon, where soon temple worship becomes corrupted. The temple is eventually destroyed, and the people are taken away into exile into Babylon. Even when the people return to the land and start to rebuild the temple, the glory never returns there. This leads us then to Jesus the Messiah, where “the Word became flesh, and did tabernacle among us” (John 1:14 Young’s Literal Translation). Jesus is the real temple, where the presence and glory of God truly dwells. Later in the New Testament, this same temple language is applied towards the church, as the Body of Christ (2 Corinthians 6:16).

The ministry of the temple continues to expand, whereby God’s presence is continued to be make known. Therefore, the experience of the church in worship becomes the vehicle for the mission of the church, whereby believers go out into the whole world, announcing God’s expanding presence through the whole of creation. This insight really helps me, as I often feel like my efforts at evangelism do not always seem to be going much of anywhere. However, when we begin to consider that mission flows out of worship, that is where the power and influence of the Spirit really begins to flow.

Finally, Kim and Beale arrive at the vision of the temple in the Book of Revelation. The work of the temple that began in the small garden of Eden continues to expand and expand until the full glory of God is revealed in the End Times temple, a temple that is pictured as the “new heavens and the new earth” (Revelation 21). Though anticipated earlier by Ezekiel’s vision of the temple, this greater temple at the end of time fills the entire cosmos.

This is a rather compelling portrait of what worship was meant to be, and what its final aim is with respect to the task that God has given His church. If you feel like your efforts to share the Gospel with others are running dry, then you know that you need to spend more time in “recharge” mode in the experience of worship. When we share times of worship with other believers in the church, that unites us and empowers us with a common vision of mission into a world that does not yet know of God’s presence.

There are a few other comments to make about God Dwells Among Us:2

Pastor Kim gives an illustration that is worth considering. When he goes on a trip away from his wife, he always carries of photo of his wife with him, to remind him of her. The photograph is yet a “shadow” of the real thing. But when he is back home with her, he no longer needs to look at the photograph. It would be foolish for him to gaze on his wife’s photo when she is sitting there right next to him.

The popular focus of many within the church today on a so-called “literal” fulfillment of the future rebuilding of temple is sort of like that photograph. What was once there on Jerusalem’s physical temple mount, where the Islamic “Dome of the Rock” currently sits, is but a shadow of the real thing. In contrast, the real thing is understood within a context of a church on a mission. Christians are to proclaim God’s expanding presence in our world, fueled by the fires of worship to a Holy and Gracious God. Why would your gaze be so focused on the “photo,” when the real thing is descending in your midst, as the whole earth is filled with the glory of God?

Okay. Perhaps many of us still need that “photograph” around as a further witness to God’s faithfulness to keep his promises. I suppose that is possible, since there are times where it is difficult to see how God’s presence is expanding through the mission of the church. It seems like there are a lot of things like that in the Bible that many feel the need to be “literalized.” I just wonder sometimes if we are not making things more complicated than they need to be.

1. Blogger Derek Rishmawy pulls out some real gems of Beale and Kim’s work concerning the parallels between Eden and the tabernacle/temple, in later Old Testament writings.↩

2. More in-depth reviews can be found at The Gospel Coalition blog, by Alastair Roberts, and elsewhere by Lindsay Kennedy, and a helpful outline of the academic version, The Temple and the Church’s Mission, by My Digital Seminary blogger Lindsay Kennedy can be found here. Gregory Beale teaches at Westminster Theological Seminary, in Philadelphia, and I became familiar with him from his writings defending biblical inerrancy and in his highly influential commentary on the Book of Revelation.   .↩

Clarke Morledge -- Computer Network Engineer, College of William and Mary... I hiked the Mount of the Holy Cross, one of the famous Colorado Fourteeners, with some friends in July, 2012. My buddy, Mike Scott, snapped this photo of me on the summit. END_OF_DOCUMENT_TOKEN_TO_BE_REPLACED
This entry was posted on Sunday, August 7th, 2016 at 8:25 pm and tagged with church, dispensationalism, mission, temple and posted in Topics. You can follow any responses to this entry through the RSS 2.0 feed.
« Four Views on the Land Promise: A Zionism Cheat-Sheet
How to Have a Good Conversation About the Rapture »