In What Sense Does God Foreknow Before He Predestines? (Romans 8:28-30) 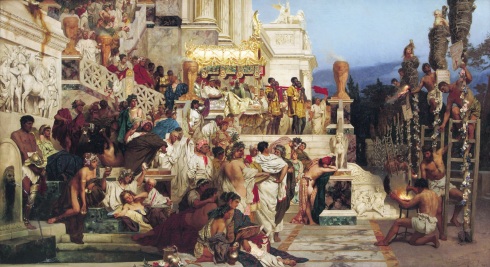 “Predestination” gets a really bad rap in our culture today. It conjures up images of an aloof or angry deity arbitrarily sending some people to bask in the fragrances of heaven and the rest to go burning in the fiery flames of hell.  Who wants to worship a God like that? But does this popular image of “predestination” conform to what the Bible actually teaches?

In Romans 8:28-30, the Apostle Paul does something that has puzzled and frustrated readers of the Bible for centuries. He brings up this subject of predestination, but he does not go into exhaustive detail here. What does Paul really mean by predestination? Do we get any clue by looking at the word foreknew that precedes predestined in this text?

A Very Brief Primer on the Doctrine of Election

There is a good reason why Paul does not dig deep into this mystery in Romans 8. It simply is not his purpose here to talk about an intricate, abstract philosophy of fatalism vs. freewill, etc. Instead, he is dealing with a very practical matter.

Earlier on in Romans 8, Paul acknowledges that the believers gathered in Rome were undergoing sufferings and persecution (Romans 8:18). Tradition has it that near this point in time, the Roman emperor Nero was using the burning bodies of living Christians as torches to light up the city at night. Life was rough for these believers. Would they make it? Would the Christian community survive? Would God truly deliver them from their suffering?

Paul does not glibly offer them some false temporal hope. Rather, Paul wishes to give his fellow Christians a sure hope in God’s eternal purposes. Paul wanted to assure the believers that God will not let His people down. The situation is indeed bad, but God will work things out eventually for the good. When pressed in from all sides, Paul is telling his readers that God “has their back.” They will persevere. They will endure.

Why will they do this? Because they have been predestined to do so. God, in his marvelous yet mysterious sovereignty has chosen, or elected, that these Christians will indeed make it to the finish line. This doctrine of “election” involving our predestination is meant to provide comfort to a beleaguered community. One way to put it is that “God has the deck stacked in our favor.” We can not lose.

Folks. That is good news. That is the primary message of Romans 8:28-30. Contrary to the popular misunderstanding about predestination so prevalent in our culture, Paul is attempting to give his readers a genuine hope in the face of tremendous difficulties. To try to force an abstract philosophy out of Paul here at this point risks reading something into the text that simply is not there.

Calvinist vs. Arminian Approaches to the Doctrine of Election

Nevertheless, a lot of people do wonder about some of the details of Paul’s argument in this passage, and it can get quite controversial. In particular, they wrestle with the part of verse 29 that says, “For those whom he foreknew he also predestined.” What is the relationship between God’s foreknowledge and His predestination of believers? Let us give it a look. Shall we?

To predestine simply means to “mark out, or decide, beforehand.” The concept of  foreknow is a little more difficult.

That is an understatement. It is actually very difficult.

This is one of those subjects where evangelical Christians have come to differences of opinion on the matter. It is is one of those areas of doctrine where the 18th century evangelists, George Whitefield and John Welsey, eventually found themselves “agreeing to disagree.”

The issue goes way back to the early years of the church, in particular with Saint Augustine of Hippo’s dispute with the layman Pelagius a good 1500 years ago or so. But most of us can not remember back that far. However, evangelical Protestants have probably heard of terms like “Calvinism” and “Arminianism,” named after the different protagonists for these theological camps, the French Reformer John Calvin and the Dutch Reformer Jacobus Arminius, in the 16th century. For example, George Whitefield was a Calvinist and John Wesley was an Arminian. See this letter from Whitefield to Wesley in 1740, and this “Sermon 58” from John Welsey in 1872, to get a flavor of their thoughts on this subject.

The term to foreknow in its barest sense means roughly to “know in advance.” But what does God “know” in advance? Well, unfortunately for the reader of Romans 8, we simply have no clear cut answer. You really have to look elsewhere in the Bible to get a better handle on this passage.

In really brief form, you have essentially two basic options to consider:

Most contemporary Bible translations of Romans 8:29, like the ESV above, do not necessarily favor one view over the other. However, the 1971 Kenneth Taylor’s The Living Bible paraphrase betrays a definite preference for the second option by rendering it like this:

For from the very beginning God decided that those who came to him—and all along he knew who would—should become like his Son, so that his Son would be the First, with many brothers (TLB, Romans 8:29)

Ah, you can probably hear the Calvinists groan in utter agony as they read this! Someone give them a nice, calming beverage…P-L-E-A-S-E!

So, how do we understand which option is correct? Is foreknowledge synonymous with election, as in the first option, or is foreknowledge different from election, where election is more associated with predestination, as in the second option (a.l.a. Kenneth Taylor)? The first option is championed by those who wish to defend God’s sovereignty, yet critics complain that it denies human freewill as creatures fashioned in the image of God. The second option seems to respect human freewill, but the other critics say that it compromises God’s sovereignty by allowing for some human ability to determine one’s salvation.

Well, there is no way I am going to settle this here in this blog post! Pages and pages have been written for centuries on this very topic! Furthermore, many people are quite settled in their opinions, and for those who have not studied passages in the Bible like this, it can be quite intimidating. It may be best ultimately to simply treat this question of the relationship between God’s foreknowledge and predestination as a divine mystery yet to be clearly revealed.

Piper vs. Witherington on God’s Foreknowledge

However, this does not mean we should avoid the topic. After all, what Paul has written is a part of Holy Scripture, and the believer is encouraged to try to understand it, trusting in the illuminating work of the Holy Spirit. But we should do so without being so anxious to force the text to do something that Paul would forbid.

John Piper is a “retired” pastor in Minneapolis who is very well known as a Calvinist. In the following video, Piper walks you through this very important passage, considers the two different views, and then gives his reasons why to foreknow means more than simply having information about us. To foreknow means to have elected us with His unfailing love and to have a relationship with us. Piper builds his argument using the following passages illustrating this Biblical sense of “knowing”:

Ben Witherington, on the other hand, is a New Testament scholar at Asbury Seminary, with an Arminian perspective. Witherington’s complaint of those like Piper is that to understand foreknowledge in a relational or approving sense is to inject too much into this passage. In his commentary, Paul’s Letter to the Romans: A Socio-Rhetorical Commentary, Witherington writes that to think of “to foreknow” in the sense of having a relationship with us in Romans 8:29, particularly before the foundation of the world, is without warrant. In a footnote, he says, “You cannot have a relationship with someone who does not exist, and more particularly who cannot have the experience of a relationship that does not exist. You can, however, know something in advance without yet experiencing it, and this is what Paul has in mind here. (page 228)”

Both Piper and Witherington are way smarter than me, and they present ideas that help us to better grapple with the context of this extraordinary passage, whether you agree with either of them or not. If you find yourself intrigued by this topic, it would do well for you to know that the Apostle Paul does go into greater detail on what he is getting at here later on in Romans 9-11 , particularly in chapter 9. What makes Piper and Witherington such great dialogue partners is that as scholars and teachers they have invested so much into understanding this section of the Book of Romans. Piper wrote his doctoral dissertation on the doctrine of election as presented in Romans 9, while Witherington is reputed to have one of best interpretive commentaries from an Arminian point of view on Romans 9-11. Acquaint yourself with the best presentations of these various arguments, not in the interest of trying to win some intellectual debate, but rather so that it might increase your desire to get to know God in His Word.

For a detailed discussion of Romans 8:29, the center of this passage, with respect to the doctrine of election, you might find the following essay from Bible.org to be helpful.

Clarke Morledge -- Computer Network Engineer, College of William and Mary... I hiked the Mount of the Holy Cross, one of the famous Colorado Fourteeners, with some friends in July, 2012. My buddy, Mike Scott, snapped this photo of me on the summit. END_OF_DOCUMENT_TOKEN_TO_BE_REPLACED
This entry was posted on Sunday, May 3rd, 2015 at 9:39 am and tagged with election, foreknowledge, predestination, Romans and posted in Apostle Paul. You can follow any responses to this entry through the RSS 2.0 feed.
« Taking the Bible “Literally”
Are Jesus’ Words Really in “Red Letters?” »

2 responses to “In What Sense Does God Foreknow Before He Predestines? (Romans 8:28-30)”