What Makes Me Cringe

I want to show you something that makes me cringe.

In the recent HBO documentary on “Questioning Darwin”, a Pastor Peter LaRuffa goes on film saying this: 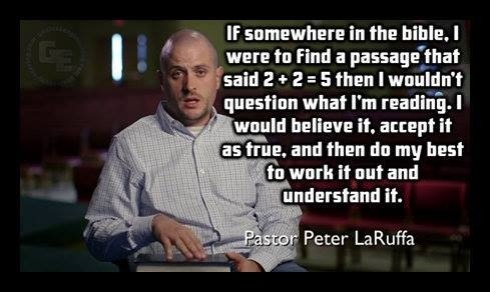 I want to go on record and say that statements like these make me cringe. I can understand when it can be confusing when we run into evidence from science and history that contradict certain ways of reading the Bible. But it becomes clearly absurd when straight-forward mathematics are involved.

Sure, I was a mathematics major in college, so I could be a little prejudiced here. But with all due respect to Pastor LaRuffa, I am not persuaded that this is quite what the Lord has in mind with respect to the authority of God’s Word.

Faith Seeking Understanding: Do It the Right Way… PLEASE!!

Saint Augustine, the great Christian intellectual of North Africa of the 4th. century, coined the Latin phrase, creed ut intelligas, which in English means “believe that you many understand”. For Augustine, the understanding of truth must be preceded by believing faith. If we try to understand everything first before we believe, we will never get there. We must always start with faith and work it out from there.

But for Augustine, it does not mean that believing faith absurdly contradicts what can be known from other sources, like the rejection of elemental mathematics. If we understand that 2 + 2 = 4, and then somehow suggest that by faith we are nevertheless to believe that 2 + 2 = 5, then this would do nothing more than to make a mockery of that faith. Instead, we need to ask if we have misread something along the way.

When you venture out of the realm of mathematics into history and science, things are not always so obvious. Granted, the technical minutiae can get tricky at points but the same principle applies, in my view. Questions about Charles Darwin’s theory of evolution fit into this category. As shown by others in the HBO documentary, it is theoretically possible to assert certain philosophical objections to how science and historical research has been conducted for the past several hundred years in order to arrive at a particular critique of some challenge to Christian faith. But do not be surprised if others do not accept the philosophical ideas in your presuppositions and propose alternative lines of thinking.

My cohort in crime here at Veracity, John Paine, recently did a survey on the Documentary Hypothesis, the theory of the origins of the first five books of the Bible popularized in the 19th century by German theologian Julius Wellhausen. Julius Wellhausen did for Old Testament biblical studies what Charles Darwin did for biology. To those who wish to have a flat-footed view of scripture, Wellhausen understandably freaks people out, much like Darwin. Wellhausen is not as well known as Darwin, but he is just as important and influential. John Paine did a lot of great research here, so I would commend his post to you before continuing.

The thing about Wellhausen was that he lived in an age that believed that science could figure out everything. He was greatly interested in a scientific approach to the Bible. The problem was that in doing so he emphasized the human side of scripture so much that he evacuated the divine side of scripture. To his credit, he was not intending to blow people away with his “higher criticism”, but his presuppositions that subjugated the divine revelation of Scripture to a reductionist approach of science has haunted biblical studies ever since. Yet very few scholars today would accept Wellhausen’s “Documentary Hypothesis” as it was originally developed over a hundred years ago. Approaches still vary, but most Old Testament scholars today would say that Wellhausen’s Documentary Hypothesis, despite its flaws, has generally helped us to better evaluate the different textual sources that went into the Bible. But instead of trying to increasingly break down the Bible into little bits of different sources in the direction Wellhausen was moving, we might have a better understanding in viewing each book of scripture more in terms of a unified whole.

In my view, it would be inappropriate to completely dismiss Wellhausen’s contribution as mere buffoonery or purely a satanic invention as some have contended. This may not be completely in the same ballpark, but such a wholesale rejection of the Documentary Hypothesis is not terribly unlike Pastor LaRuffa’s bit of advice.

Many sincere believers insist that Moses wrote every single word of the first books of the Bible, the Pentateuch. I am sorry folks: Moses was not giving us the historical details of his own death before it even happened (Deuteronomy 34), and neither was he non-humbly promoting himself as the most humble man on the face of the earth (Numbers 12:3). We need to be honest about the challenges in the Bible and treat them seriously.

As Old Testament scholar Pete Enns puts it in this informative essay, the long term value for the Documentary Hypothesis suggests that:

The Pentateuch as we know it was not authored out of whole cloth by a second millennium Moses, but is the end product of a complex literary process—written, oral, or both—that did not come to a close until sometime after the return from exile.

Just as with the debate concerning evolution, the real points of disagreement are found in how the evidence is interpreted and the presuppositions guiding such interpretation. As John Paine indicated, how you answer these questions largely depends on the type of presuppositions you hold and the method you use to explore history.

So, How Do You From Faith Seek Understanding the Right Way?

I am inclined towards David Williams’ view that there is such a thing as faithful criticism. One need not be “critical” in the sense of attacking God’s Word, though plenty have done that. Being “critical” simply means not merely accepting a particular tradition but rather taking the time and energy to investigate the evidence and make an evaluation covered under a blanket of prayer and having humility before the ultimate author of the text, God Himself.

Drawing back on Molly Worthen’s thesis about the crisis of authority in evangelical thought, the struggle evangelical Christianity has with the challenges of the Old Testament regarding history and science is right in line with Worthen’s question about the relationship between faith and reason with which we as Christians wrestle. Every believer has the tendency to answer the faith/reason question differently, but I would argue that some answers might benefit from some serious improvements.

Back to Pastor LaRuffa and the Questioning Darwin Video

That being said, and perhaps admitting that HBO might have edited out some of what was actually stated in the uncut video, I would like to make an attempt to rescue my brother Pastor LaRuffa by suggesting that what he should have said is something like this:

If somewhere in the bible, I were to find a passage that said 2 + 2 = 5, then … before I went any further, I would ask some real basic questions: Am I reading the text correctly? Is the text really saying that 2 + 2 = 5, or have I misinterpreted it? In other words, I would not rush to question the authority of the Scriptures.  Instead, I would question my reading and assumptions I am bringing to the text. Once that is reasonably settled,…  I wouldn’t question what I’m reading. I would believe it, accept is as true, and then do my best to work it out and understand it.

I think this is much, much better, honors the Word of God more faithfully, and it helps me to cringe a lot less.

Clarke Morledge -- Computer Network Engineer, College of William and Mary... I hiked the Mount of the Holy Cross, one of the famous Colorado Fourteeners, with some friends in July, 2012. My buddy, Mike Scott, snapped this photo of me on the summit. END_OF_DOCUMENT_TOKEN_TO_BE_REPLACED
This entry was posted on Wednesday, February 26th, 2014 at 5:38 pm and tagged with veracity and posted in Topics. You can follow any responses to this entry through the RSS 2.0 feed.
« Who Wrote the Bible? (Part 3)
Five Views on Biblical Inerrancy »

9 responses to “What Makes Me Cringe”