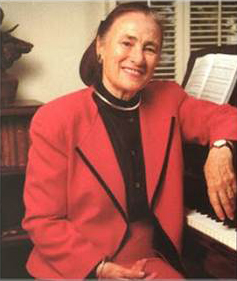 Edith Schaeffer, 1914-2013. Expressing a heart for Christ, warts and all, and shaping several generations of Christians.

Edith Schaeffer died earlier this year, on March 30, so I would be remiss to let 2013 pass without remembering the life of this remarkable woman. Known to most people as the wife of influential evangelical philosopher and pastor Francis Schaeffer, Edith has had her own contribution to make to the life of the evangelical Christian church: mother, devoted wife, gracious host, prolific author, and creative artist, among other things.

To my knowledge, the only time a woman has ever occupied the pulpit to deliver a sermon in our church in over some thirty plus years was when Edith Schaeffer came to town in March of 1994…. and boy, was it a doozie!! Apparently, Edith (at age 79 back then!) had no concept of time and she kept going on… and on… and on. After well over an hour plus after she had started, our senior pastor was still sitting there sweating bullets as he watched couple after couple after couple get up and leave, all frustrated that she had gone on so terribly long and our pastor had done nothing to stop her! But how could you interrupt the wife of one of evangelicalism’s most influential voices of the 20th century?

Ministry Together: A Life of Creativity and Caring…. and Some Cracks Along the Way

Edith was born on the mission field in 1914, a daughter of parents serving in the China Inland Mission. Later, back in the United States, she and new her husband Francis were part of the world of uncompromising conservative Presbyterians in the 1930s and 1940s. But they both experienced gut-wrenching, internal conflict within that world. On the one hand, they both loved God and the Bible, rejecting the Western, modernist drift away from Biblical authority, and yet they felt suffocated by the narrow cultural confinement of fundamentalism and often bitter separatism from other Christians who were not “pure” enough in their doctrine.

This deep seated intellectual and spiritual crisis eventually found itself expressed in a unique mission called L’Abri, starting at a chalet in Switzerland, in 1955. At L’Abri, Edith and Francis in their middle period of life sought to reach out to a young generation of wandering students who would live with the Schaeffers and ask tough questions about faith, philosophy, love and life. But the most intuitive bridge Edith and Francis had in reaching these young people was a passionate appreciation for music and art. The Schaeffers ministered together using a two pronged approach: they were generous with their love and acceptance for others and they were unwavering in their commitment to Biblical truth. The L’Abri approach filled a critical intellectual and spiritual void left by an evangelicalism that had forgotten what the full mission of the church was all about.

And the young people kept coming. Even a few celebrities like Timothy Leary and Eric Clapton received the Schaeffer’s warm Christian hospitality. Clapton passed on his copy of Francis’ Escape from Reason to his friend Jimmy Page, guitarist for Led Zeppelin. Word was getting around about L’Abri.

In between baking and cleaning and raising several children, Edith would join her husband in conversations with these searching young people, topics ranging from the existentialism of Soren Kierkegaard and Jean Paul Sartre to questions about the Bible, all while listening to Mozart, Cole Porter recordings and the Beatles. Edith modeled what many have thought “Biblical womanhood” should look like and still be daring and creative. It was edgy.

In the late 1970s, spurred on by the ideological activism of their son, Franky, Francis Schaeffer became passionate about the crisis of abortion, the decline of Christian morality in Western culture, and what they controversially saw as the erosion of Biblical inerrancy in evangelical Christianity, taking his message via the art form of film into many churches (this is so 70’s!), particularly in the United States. On one side, it can be rightly argued that the dissatisfaction of the Schaeffers galvanized evangelicals into a unified movement against the decline of genuine Christian faith in the West. However, on the other side, critics contend that the Schaeffers’ dogmatic particularism was at various points uninformed and did the opposite, tragically alienating others within the Body of Christ who otherwise shared much of the same concerns. No matter how one looks at the legacy, one can safely say that son Franky and Francis Schaeffer, who had recently been diagnosed with cancer, provided the intellectual passion that drove the emergence of the Christian Religious Right in the 1980s as a powerful force within American politics. The nuanced, welcoming and Biblically discerning spirit of the middle-period Schaeffer years was being gradually replaced by a more polarizing tone reminiscent of Francis’ and Edith’s early days in separatist fundamentalism. In the background, away from the front lines of the culture wars, Edith remained the wellspring of love in her family, all while caring for the guests who were constantly flowing in and out of L’Abri, and continuing her own writing.

After Francis’ death in 1984, Edith continued to show the love of Christ through the L’Abri ministry, but soon the cracks began to show. Edith’s daughters continued in her example, but her son, Franky, rebelled from his conservative Protestant moorings and joined the Eastern Orthodox church. Franky went much farther though, embracing leftist and progressive politics, excessively railing against his own excessive rantings of his youth. Franky became a successful and engaging author, chronicling the ups and downs of growing up in a missionary home that was obsessed about “saving the world”, exposing claims about his dad’s bouts with depression and abusive rage against his mother, and Edith’s desperate attempts to try to hide her family’s imperfections.

I get the impression that Franky (now “Frank”) Schaeffer’s writings have been his way of “doing penance” and “atoning for his sins”, working through his guilt for getting his father so deeply involved in the politics of the Religious Right (If I was ever in the same room with him, I probably would have to check my wallet obsessively to make sure it was not missing). But to his credit, Frank respectfully notes that his mother Edith continued to stick by him, even when he forthrightly appeared to expose her less glorious side for all of the world to see.

At Lunch with Edith Schaeffer

That Sunday in 1994, Edith finally did finish speaking at our church! Afterwards, I joined her and a group of “Edith fans” at the home of one of my longtime friends for lunch. I had the privilege of chatting with Edith, though I was pointedly trying to show that while I was intellectually formed by much of her husband’s writings and grateful for it, I had come to think that he had missed some really crucial things in his historical and theological analysis. I was hoping to discuss some of the difficulties with Francis’ A Christian Manifesto and his approach to doing history, but we never got that far.

I will not forget Edith’s reaction. She patiently listened to what I had to say, but then she gently tried to express the main ideas that she and her husband shared and how it was grounded in the absolute Christian truth of the Bible, ideas that are still being continually eroded away in Western culture. Before I had a chance to respond, the call for lunch came, and she immediately offered her assistance to our hosts, even though she was the most honored guest. Over lunch, she talked about some of her experiences juggling between being a homemaker and an author, and reflected on what she loved about writing, all the while enjoying the food, asking our host about some of the preparations that were made for the meal, and asking questions about the artwork on the walls of our host’s home.

It just struck me that here was this woman who in some ways was a bundle of contradictions, and yet as she clearly had confidence in God she was able to express herself in some of the most natural, Christ-honoring, life-affirming and unassuming ways.

L’Abri Fellowship International continues the legacy of the Schaeffer’s ministry, at near a dozen different places across the world, where young people still continue to come to ask questions, experience community, and explore the Christian faith. These days however, particularly in the original Switzerland branch, L’Abri is less heady and rationalistic than in the Francis Schaeffer era. Instead, L’Abri is more oriented towards discovering what authentic Christianity is all about, seeking to embrace some of what some say are more positive aspects of the Schaeffers’ historic ministry.

Back in 1988, Edith saw what she considered as this dangerous and subtle shift coming and worked with her daughter and son-in-law, Debby and Udo Middelmann, to found the Francis A. Schaeffer Foundation in nearby Gyron, Switzerland, which has sought to retain more of the original L’Abri focus envisioned by the Schaeffers in earlier years. The Middelmanns here reflect on the details of Edith Schaeffer’s funeral service there in Gyron, including the text of the funeral sermon. However, this variance between these different visions of the Schaeffer legacy reflect, in my view, the curious tension of the often conflicted yet expressive character of Edith Schaeffer’s personal faith and long-lived life.

Clarke Morledge -- Computer Network Engineer, College of William and Mary... I hiked the Mount of the Holy Cross, one of the famous Colorado Fourteeners, with some friends in July, 2012. My buddy, Mike Scott, snapped this photo of me on the summit. END_OF_DOCUMENT_TOKEN_TO_BE_REPLACED
This entry was posted on Tuesday, December 31st, 2013 at 11:55 pm and tagged with Edith Schaeffer, Francis Schaeffer, veracity and posted in Witnesses. You can follow any responses to this entry through the RSS 2.0 feed.
« I Can’t Get No Satisfaction… In Christ Alone?
Time for Apologetics »