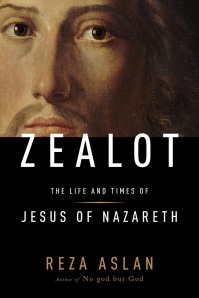 Was Jesus a “Zealot”, a Jewish political revolutionary? According to a new popular book by Reza Aslan, Zealot: The Life and Times of Jesus of Nazareth, the answer would be “yes”.

Aslan’s conclusion is in marked contrast with what I wrote on Veracity just last week and before. There I briefly made the case that Jesus offered an alternative between those Jews, like the tax collector, Matthew, who colluded with Rome, and others like Simon the Zealot, who sought to violently eject the Romans from the land. Matthew and Simon joined the group of Jesus’ twelve disciples and were drawn by Jesus’ extra-political claim as being the One who transcends and personally fulfills the messianic hopes and national aspirations of first century Judaism. A less convinced author, Reza Aslan, pretty much casts aside Jesus’ relationship with those like Matthew and places him squarely in the Zealot camp, prior to the formation of a distinct “Zealot party” that dominated Jewish politics during the era of Josephus.

But the Zealot issue is not what has captured the public’s attention about Aslan’s book. Rather, the spark was a recent, combative interview on the FOX television network. The controversy originated over whether or not a Muslim had a right to write a book about Jesus. The case that Aslan was making got lost in a series of ad hominem attacks. Yikes!! Granted, Aslan makes an embarrassingly big deal about how many academic degrees he has (“look how smart I am!”), but might I suggest that the way FOX conducted the interview was not terribly helpful, to put it mildly?

In response, many in the secular media, such as in this NPR story, have highlighted the fact that Aslan, whose family fled Iran during the 1979 Iranian revolution, was raised in a family with an obscured Muslim background but then converted to an evangelical Christian faith as a teenager. Then, in an about face, Aslan converted back to Islam while attending college. It is important to note that Aslan’s approach to Islam now is more of a moderate/liberal variety. Aslan is part of a growing movement seeking to amalgamate Western, secular values with the Islamic faith. As he presents it, he is not a Christian since he does not believe Jesus is divine, but nevertheless he is a follower of Jesus. However, the question I have is whether the “Jesus” he is following is the Jesus as presented by the New Testament or rather the Jesus of Aslan’s academically-inspired imagination?

Here is the problem: Contrary to some media reports, there is really nothing new in Aslan’s book that has not been argued by other scholars for perhaps about the past 150 years. The “quest for the historical Jesus” is something that has been endlessly debated for many, many decades now in academia. But give Aslan some credit, for who would think that a book on Jesus would hit #1 on the New York Times Best Seller list?

However, does Aslan’s thesis really hold up?  Stephen Prothero, a professor of religion at Boston University, and someone I would consider as a theological moderate, and someone who has actually read Aslan’s book, has a very perceptive review.   Prothero (as with other reviewers referenced below) finds that while some of the things in Aslan’s book make a contribution, “Aslan is more a storyteller here than a historian.”   So while his thesis is creatively imaginative, he explains away too much of the evidence found in the New Testament to make his point.

The Challenge Presented by “History of Jesus” Research:

Would I read Aslan’s book? Well, let’s just say that I already have a number of  titles on this topic. To others I would always recommend as a place to start The Meaning of Jesus: Two Visions, which is a friendly exchange of views between N. T. Wright, a British evangelical scholar at St. Andrews University in Scotland, and Marcus Borg, a liberal scholar. What I appreciate about N. T. Wright’s approach, and others like him (see below), is that these evangelical thinkers firmly believe that you can read the Bible as God’s Authoritative Word and still raise and discuss critical, historical questions. Plus, you can actually read popular works from guys like N.T. Wright without falling asleep. Tragically, for many today, reading the Scriptures from the perspective of devotional obedience and reading the Bible for serious critical study are two diametrically opposed experiences.

As an “old” Young Life guy, it really saddens me when someone like Reza Aslan makes a commitment to Christ as a teenager at a summer camp, only to get his head all twisted around in college.   I have seen this story played out sadly many, many times: a young person as a teenager comes to Christ, gets a barebones training in apologetics in their church (if any), and then goes to find out outside of the church, particularly in some college’s religious department, that their church was not telling them everything, and then they seriously question or reject their faith.

Eventually, really, really smart and articulate people like Reza Aslan, along with other ex-evangelical folks like Bart Ehrman become darlings in the media. If Christians then ever try to engage folks like Aslan and Ehrman at the local church level, it is typically in damage-control mode.  But if Reza Aslan ever would read anything here at Veracity, I would want him to know that there are some of us in the evangelical church who struggle with the same sets of great questions that Aslan has asked, but who have been coming up with very different answers than he has….Alas, I digress.

Jesus:  A New Kind of Politics?

Aslan does a have a point to make in his “Jesus as Zealot” thesis.  There is a political dimension to the Gospel .  But what kind of politics?  The difficulty in establishing Aslan’s “Jesus as Zealot” thesis comes down to one of evidence.   We are learning more from archaeology, early Greco-Roman literature, and folks like Josephus.   We have made a number of advancements recently in gaining a better understanding of Second Temple Judaism, the religious and political world that forms the backdrop to the New Testament.    But aside from the New Testament itself, insight into the political motives of Jesus rests on a razor-thin bed of evidence.  From Aslan, how do we know that the early Christian community reinvented an apolitical Jesus message following the failure of the Jewish Revolt and destruction of Jerusalem and its Temple in AD 70? How does this square with the Apostle Paul’s message that transcends Jewish regional politics, propagated several decades prior to AD 70?  In contrast, the firm witness of the New Testament is that the Christian community, Jewish and Gentile, was indeed proclaiming Jesus as their King, but He was not just any other ordinary King. This was a King that they all worshipped, and they called others, and still call others like you and me, to worship Him.   Though he admittedly greatly admires Jesus, the boldness of the New Testament message, that Jesus was and still is the divine King, is a claim that Aslan in his creative imagination still seems fit to reject.

Here on Veracity, you can find an ongoing series of blog posts concerning Jesus as the Son of Man (start from the bottom of the list and work from there towards the top) that attempts to wrestle with some of the other more nagging issues in contemporary historical scholarship, many that are raised by writers such as Reza Aslan, while seeking to affirm the reliability and authority of the Bible.

A couple of other more technical, academic reviews of Aslan’s book echo the same types of cautions raised by Stephen Prothero above. One is by a New Testament professor at Lancaster Theological Seminary, Grey Carey, and another is by the editor of the Journal for the Study of the Historical Jesus, Anthony Le Donne.

Looking for other scholars, like N.T. Wright, who hold to an historically-orthodox, evangelical faith who address these types of issues?   Consider Asbury’s Ben Witherington, Acadia’s Craig Evans, Bethel Seminary’s and pastor Gregory A. Boyd,  and Dallas Seminary’s Darrell Bock, among a number of others.

HT: Pete Enns’ blog for the pointers to the Carey and Le Donne reviews.

Clarke Morledge -- Computer Network Engineer, College of William and Mary... I hiked the Mount of the Holy Cross, one of the famous Colorado Fourteeners, with some friends in July, 2012. My buddy, Mike Scott, snapped this photo of me on the summit. END_OF_DOCUMENT_TOKEN_TO_BE_REPLACED
This entry was posted on Tuesday, August 6th, 2013 at 9:07 am and tagged with Craig Evans, N.T. Wright, Resa Aslan, Son of Man, veracity, Zealot and posted in Topics. You can follow any responses to this entry through the RSS 2.0 feed.
« Dr. Bell’s Submarine Chaser
Wisdom: John R. W. Stott »