Where Do “Live Nativity” Scenes Come From? 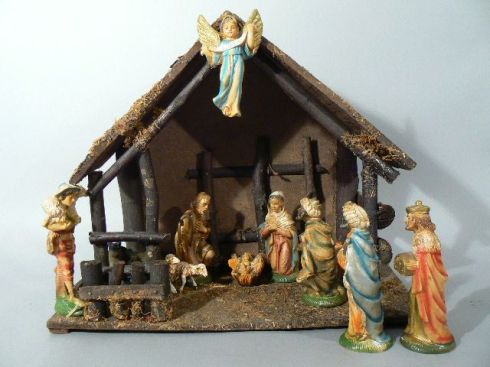 A typical nativity creche …. replete with Joseph, Mary, the baby Jesus, a shepherd and the “Three Kings of Orient are,” much like the one I grew up with. Historically accurate? Not so much. But it does give us food for thought.

Christmas is that time of year when many churches do their best to portray the Christmas story. In the era of COVID, indoor Christmas concerts have become tricky enterprises. But what about an outdoor venue to tell about the story of the Incarnation? What about bringing in live animals, too?!

Ah… Enter in the “live nativity”!

Saint Francis and the “Modern” Nativity

Throughout the history of church, the telling of the Christmas story has been a staple of Christian tradition. But the most well-known version of the “live nativity,” featuring shepherds and magi coming to worship at the feet of Jesus, along with “ox and ass” adoring the baby Jesus, can be traced back to 1223, in Greccio, Italy.

According to St. Bonaventure’s Life of Saint Francis, the famous 13th century evangelist created a manger scene in a cave near this Italian city, with human actors and animals playing various parts to tell the story of Christmas. Pope Honorius authorized the public display, and the popularity of the “live nativity” took off after that.

Yet while kids in particular enjoy nativity scenes today, the art of doing live nativity has some problems… and it is not about how to care for all of those animals! When astute observers read the nativity stories found in the Gospels of Matthew and Luke closely, they soon discover that placing the shepherds together with the wise men “from the East,” does not fit the chronology. However, Saint Francis, was primarily concerned about bringing in all of the various elements of the story, in order to tell a simplified, cohesive narrative, to a medieval European audience who were mostly illiterate, as opposed to following a strict chronology.

Nevertheless, this distortion of what is actually found in the New Testament has created fodder for generations of critics to cast a skeptical eye over the live nativity. While significant challenges for harmonizing the stories told by Matthew and Luke do exist, it is still possible to draw together a consistently whole, coherent narrative, albeit more complex than what St. Francis put together. 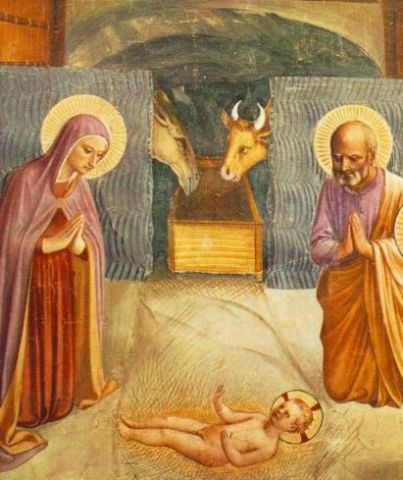 A close-up of part of Fra Angelico’s fresco, in Florence, showing the ox and ass peering in from behind their stalls, to catch a glimpse of the baby Jesus.

Animals Who Worship the Baby Jesus

One of the more interesting aspects of the St. Francis’ nativity scene, is the use of the “ox and ass.” The popular 14th century carol, “Good Christian Men, Rejoice,” has the well-known line, “Ox and ass before Him bow, And He is in the manger now. Christ is born today! Christ is born today.”

The problem is that in the Gospels, the mention of “ox and ass” is nowhere to be found. But the theological development of this idea across the centuries is a fascinating topic.

An ox and donkey are mentioned in Isaiah 1:3: “The ox knows its owner, and the donkey its master’s crib, but Israel does not know, my people do not understand.” Christian theologians across the centuries have looked upon this as an appropriate metaphor explaining why so many do not accept the Christmas story, even today.

However, if you combine Isaiah 1:3 with the Septuagint reading of Habakkuk 3:2, the connection with Christmas becomes more apparent. Most English Bibles today read Habakkuk 3:2 as based on the Masoretic, or ancient Hebrew text of the Old Testament, something like this (from the ESV):

First century Jews across the Greek speaking world, along with the earliest Christians, read from the Septuagint, the ancient Greek translation of the Old Testament, where the phrase “in the midst of the years” reads differently as “in the midst of two living creatures,” as in something like Sir Lancelot Charles Lee Brenton’s 1844 English translation of the Septuagint:

The first mention of connecting the ox and ass to the Christmas story can be then traced back to the Gospel of Pseudo-Matthew, otherwise known as The Infancy Gospel of Matthew, most probably written in the 7th century, as a speculation into some of the otherwise unknown events of Jesus’ life, before he enters his public ministry as an adult:

Some may object that an historical look back into the origins of today’s popular “live nativity” might ruin certain elements of Christmas for them. But it need not be thought of that way.

Instead, an honest look at where certain Christian traditions come from should do three things:

Clarke Morledge -- Computer Network Engineer, College of William and Mary... I hiked the Mount of the Holy Cross, one of the famous Colorado Fourteeners, with some friends in July, 2012. My buddy, Mike Scott, snapped this photo of me on the summit. END_OF_DOCUMENT_TOKEN_TO_BE_REPLACED
This entry was posted on Friday, December 17th, 2021 at 6:00 pm and tagged with Christmas, Nativity, saint Francis and posted in Topics. You can follow any responses to this entry through the RSS 2.0 feed.
« How Believers Become Unbelievers: A Review of Alec Ryrie’s Emotional History of Doubt
Did Herod’s Massacre of the Innocents Really Happen? »

4 responses to “Where Do “Live Nativity” Scenes Come From?”