The Madness of Crowds

In the introduction to his brilliant book, The Madness of Crowds: Gender, Race and Identity, British author Douglas Murphy, begins by saying:

“We are going through a great crowd derangement. In public and in private, both online and off, people are behaving in ways that are increasingly irrational, feverish, herd-like and simply unpleasant….”

“[Yet] the origin of this condition is rarely acknowledged. This is the simple fact we have been living through a period of more than a quarter of a century in which all our grand narratives have collapsed.”

“One by one, the narratives we had were refuted, became unpopular to defend or impossible to sustain. The explanations for our existence that used to be provided by religion went first, falling away from the 19th century onwards.”

“Then over the past century the secular hopes held out by all political ideologies began to follow in its wake. In the latter part of the 20th century we entered the postmodern era. An era that defined itself, and was defined, by its suspicion towards all grand narratives. However, as all schoolchildren learn, nature abhors a vacuum, and into the postmodern vacuum new ideas began to creep, with the intention of providing explanations and meanings of their own.“

What makes Murphy’s observations so strangely poignant, is that he is not a professing Christian. Rather, he is an openly practicing gay atheist. Yet Murphy manages to highlight the following quote, by G. K. Chesterston, a Christian, who was also one of the most profound cultural critics of the modern world, back almost exactly 100 years ago:

“[The] special mark of the modern world is not that it is skeptical, but that it is dogmatic without knowing it.”

Chesterton had prophetic insight in his own day. Douglas Murray revives that same insight for where we are in the 21st century. 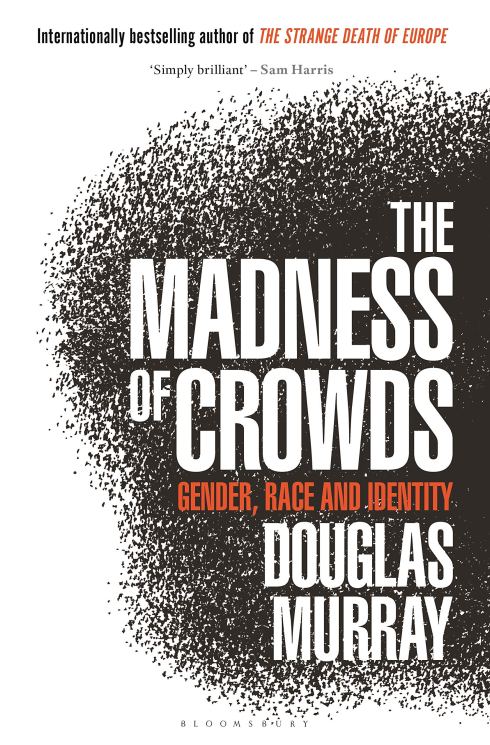 In The Madness of Crowds, Douglas Murray lays out what he sees is a new, post-modern religion, that has sought to supplant Christianity in the West. But it has only starting to emerge, with its full-throated dogmatism, somewhere within the past ten years or so.

I recall about ten years ago, when the controversial Mormon and conservative news commentator, Glenn Beck, cautioned Christians to beware of churches that promote diversity and social justice. “I beg you look for the words social justice or economic justice on your church Web site. If you find it, run as fast as you can. Social justice and economic justice, they are code words…”

My response to Mr. Beck’s critique then, just as it is now, is that Mr. Beck simply does not understand what the Bible is talking about, when it is talking about “social justice,” or specifically, “justice.” As I had learned years ago, the language of “intersectionality” and “identity,” as interpreted through the lens of Scripture, were simply intellectual tools, to help us to understand the fallen world in which we live, and make sense of the lived, life experiences of those who face oppression or misunderstanding, who have yet to experience the full reality of being made new creatures in Christ (2 Corinthians 5:17). As I have outlined elsewhere, the concept of “social justice” actually has its roots in the Bible.

But times have changed, and the pace of that change is unrelentingly fast. In particular, I have been increasingly learning, that words can alter their meanings over time, and such words can be spun very differently, in different contexts. What were once merely helpful intellectual tools have morphed into becoming ideological markers, whereby rationality is sacrificed on the altar of sentimentality, and justified on the basis of Neo-Marxist philosophy. When the Biblical concept of social justice gets uprooted from its essentially Christian, Scriptural context, a new religiosity gets formed, promoting a form of dogmatism, just as bad, if not infinitely worse than the most wooden, legalistic forms of Christian fundamentalism.

What is so scary about this, is just how pervasive it is in all levels of society. Take for example, this easy experiment that Douglas Murray shows in his book, as to how Silicon Valley has embraced this new religiosity, and smuggled it into our iPads and iPhones, without most of us ever knowing it. Type into Google’s search engine, “straight couples,” and look for images, and you will immediately notice that a large number of the top hits will be either gay or lesbian couples, with relatively few heterosexual couples to be found. On the other hand, if you type in “gay couples” instead, you will get exactly what you are looking for, countless gay couples, and no straight couples anywhere to be found. Nevertheless, we all know that “straight couples” far outnumber “gay couples” throughout society. So, why are the Google search results so skewed in favor of “gay couples” over and against “straight couples?”

This is “intersectionality” as an ideological project at work, going way beyond the more helpful notion of “intersectionality” as a tool. In oh-so-subtle ways, the world of social media is forming our minds, with the new religion defining the new dogmatism. The supposedly unbiased nature of machine learning algorithms, that tech giants like Google (and they are not alone!!) use to sort their search results, are being employed to further this post-modern agenda.

One could suggest, as Douglas Murray does at times, that such language of “intersectionality” and “identity” has always been rooted in non-Christian, Marxist ideology. Yet this would be news to the writers of the Old and New Testament, such as when Christians make reference to the fact that Christians have a new “identity” found in Christ, as taught by the Apostle, in 2 Corinthians 5:17, mentioned above. But we now live in a world where the new forms of social media, driven by Silicon Valley, available 24/7 on our smart phones, are causing a whole new generation of young people to lose those long held connections to a Christian frame of mind.

Murray’s point is well taken, in that much of the talk of “intersectionality” and “critical race theory” today is decidedly not Christian today, but rather unashamedly Neo-Marxist. In his 1960s “I Have a Dream” speech, Martin Luther King Jr. argued for a Christian vision of a colorblind society. “I have a dream that my four little children will one day live in a nation where they will not be judged by the color of their skin but by the content of their character.” But Murray’s central contention in The Madness of Crowds is that the contemporary, ideologically-driven “social justice” movement has flipped King’s colorblind vision upside down upon its head, and freedom of speech has suffered as a result.

The silencing and bullying that seeks to suppress free speech is horrifying enough. The fact that such promotion of this type of “intersectionality” rhetoric shows very little, if any shame, only heightens the analysis that Douglas Murray displays in his prose. But it is not merely shameless, it is frankly unbelievable, or as the title of Murray’s book suggests… it is madness.

Perhaps the most troubling message in The Madness of Crowds comes in Murray’s chapter on “On Forgiveness.” In this new, ideologically-driven “intersectionality” movement there is no opportunity for forgiveness. Once someone has been identified as being a person of privilege, due to their gender, race, etc., the only “moral” way forward is to ally with the identified non-privileged. If such a person of privilege “sins,” in this religious paradigm, not even an apology is acceptable.  Even “sins” of the past can never be forgiven. Unlike the Christian faith, there is no opportunity for redemption. There is only condemnation. This new religion is a view of the world without hope or forgiveness.

The Madness of Crowds is not for the most squeamish. There were moments, when reading The Madness of Crowds, where the author was very explicit in matters delicate and morally degrading, to the point where I felt uncomfortable. But there is a purpose here. Murray is not gratuitous, for he chooses his words carefully to make his points, which are sadly necessary.

As an aside, in the Audible version of the title, Douglas Murray reads his own book. Just listening to the cadence and his British accent adds to the effectiveness of driving Murray’s argument home.

While The Madness of Crowds was not the most profound book I read this year, it is surely the best book I read that was released this year. Concerned and thoughtful Christians need to push this book to the top of their reading list.

I have Douglas Murray to thank, to help expose the elephant in the room, regarding how the post-modern phenomenon of political correctness and identity politics gone viral has poisoned the hearts and minds of so many in our day. Unlike Murray, I have not given up on what Murray calls “religion,” which I find to be the Gospel of Jesus Christ, as the true antidote to our difficulties today. Yet many Christians seem to be blithely unaware of what is being propagated, in much of the social media in our post-modern age. Sometimes, when the Church finds it so hard to figure things out herself, God can even raise up a gay atheist, to tell us the truth.

Get this book, and read it.

Clarke Morledge -- Computer Network Engineer, College of William and Mary... I hiked the Mount of the Holy Cross, one of the famous Colorado Fourteeners, with some friends in July, 2012. My buddy, Mike Scott, snapped this photo of me on the summit. END_OF_DOCUMENT_TOKEN_TO_BE_REPLACED
This entry was posted on Sunday, December 8th, 2019 at 6:00 pm and tagged with critical race theory, Douglas Murray, gay and lesbian, intersectionality, racism and posted in Topics. You can follow any responses to this entry through the RSS 2.0 feed.
« F.F. Bruce on Biblical Inspiration and Interpretation
Were There Humans Before Adam Was Created? »

4 responses to “The Madness of Crowds”