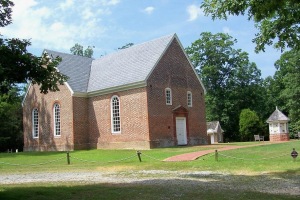 St. John’s Church in King William County, Virginia, one of the many historic, colonial era churches, where the altar always faces East.

If you drive around parts of rural Virginia, the state where I live, you will find a number of churches built in the pre-Revolutionary War era. Nearly all of these old churches have one thing in common: the church altar faces east. The great, historic cathedrals of western Europe do the same.

Why? In Mark 16:1-2, we read that Jesus’ women disciples went out to the tomb to anoint the dead body of Jesus with spices, at sunrise, only to find out that Christ had already risen. As a result, Christians have historically associated the Resurrection with the sun rising out of the east, in hopes that believers will one day share in that very same Resurrection that Jesus experienced, some 2,000 years ago. Many churches even today continue this tradition by having sunrise services on Easter morning. In fact, the word for Easter has the same root from which we get the English word for east.

Now some try to overly complicate this by associating Easter with having pagan origins, a tale which can be easily debunked (see here, here, and here). But, if it makes people feel better, just substitute the Scriptural Greek word pascha, transliterated from the Hebrew word for passover, as used by the Eastern Orthodox, or call it “Resurrection Day.” Whatever.

The point is: Do not get hung up on a word like Easter. Instead, please focus on what the concept behind the word means. Christians celebrate Jesus’ Resurrection from the dead, because it gives us the great hope, that one day, we too will inherit Resurrected bodies. For a quick five-minute summary on the meaning of Resurrection Day, Easter, or Pascha, here is Bible scholar Ben Witherington.

In the meantime, let us celebrate remember the meaning of Resurrection Day: HE IS RISEN!

Clarke Morledge -- Computer Network Engineer, College of William and Mary... I hiked the Mount of the Holy Cross, one of the famous Colorado Fourteeners, with some friends in July, 2012. My buddy, Mike Scott, snapped this photo of me on the summit. END_OF_DOCUMENT_TOKEN_TO_BE_REPLACED
This entry was posted on Sunday, April 1st, 2018 at 9:00 am and tagged with Easter, pascha, Resurrection and posted in Topics. You can follow any responses to this entry through the RSS 2.0 feed.
« Did Jesus “Descend into Hell?” (Explained in 3 Minutes)
The Easter Effect »