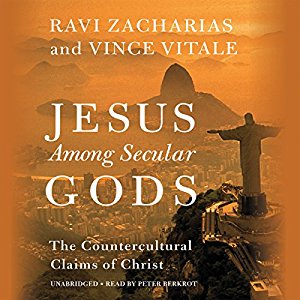 Jesus Among Secular Gods, by Ravi Zacharias and Vince Vitale. One of Ravi Zacharias’ wonderful books….(just, please, do not call him “Doctor”)

I have been an enthusiast for the apologetics ministry of Ravi Zacharias for several years. So, I feel compelled to respond to recent allegations of impropriety, as reported in ChristianityToday magazine.

Ravi Zacharias, his radio program Let My People Think, and his ministry, RZIM.org, have blessed the church with excellent materials in Christian apologetics. Our church was edified when Ravi came as a guest speaker several years ago, and I personally have taught several Adult Bible Classes, using Ravi’s material. Long-time Veracity readers will observe that we link to RZIM resources multiple times. I am still encouraged by the quality of Ravi’s work and ministry, for the sake of the Gospel.

I am therefore disappointed to learn of the recent allegations, that Ravi has misrepresented his academic credentials, over the years. I knew that Ravi had a Master of Divinity degree, but that he never has pursued an academic doctoral program, of any sort. However, he has received “Honorary Doctorates”. What I did not realize, is that this has led a number of Christians to mistakenly refer to Mr. Ravi Zacharias as “Dr.” Ravi Zacharias.

RZIM has responded that it has been customary, in certain cultures, where Ravi goes, that they refer to him as “Doctor,” out of a sign of respect for elders. This is evidently so. But it is inappropriate to go by the status of “Doctor,” in all cultural contexts. This may not be a big deal for some people, but I would disagree.

In an American context, calling someone “Doctor” gives the mistaken impression that the individual has earned an academic degree, when it was actually only an honorary degree. The two are not equivalent. If someone practicing medicine claims to be a “Doctor,” but has not an earned degree, this would be misleading. The same standard ought to apply to Christians who pursue academic work, to further a ministry. So, it is disturbing to learn that RZIM itself did not immediately and thoroughly self-correct this issue, when it was first raised two years ago, in 2015.

There are a few other issues, brought out below, in the video by the Steve Baugham, who describes himself as the “Friendly Banjo Atheist.” You can read RZIM.org’s response to some of the allegations (noted also in the Christianity Today article), Christian blogger Warren Throckmorton’s research, and Mr. Baugham’s video and other materials, and make your own assessments. As to the allegations with respect to the Canadian couple, there is just something weird going on there, that I can not fully grasp. I find there are several lessons to be learned from this most unfortunate situation:

I had the privilege of meeting Ravi Zacharias, when he visited Williamsburg, and our church, those few years ago. I found him to be a most gracious, genuine, and caring man. He is on the “front-lines” for the Gospel, so it comes as no surprise that he would have critics.

Steve Baugham may have an axe to grind, but nevertheless, the grist for the mill has at least some substance. The current crisis Ravi Zacharias is experiencing is surely painful, and those who have benefited from his work should earnestly pray for him, and the rest of the RZIM ministry team. This is not an unrecoverable situation. Contrary to Baugham’s conclusion, at the end of his video, I personally believe that this is an opportunity for RZIM to make something right out of this. Let us pray that Ravi, and those who work with him, will learn these painful lessons and do the right thing.

Also, if you check the Wayback machine, for June 26,2016, for the Oxford Centre, an Christian study center in Oxford, England, you will see that under endorsements, it lists “Dr. Ravi Zacharias” and  “Revd Professor Alister McGrath.” This is altogether strange, as Ravi has no PhD, and Alister McGrath has several. RZIM helped to start the Oxford Centre. Why would Ravi be listed as “Dr.,” but not Alister McGrath? Thankfully, the Oxford Centre has since fixed the issue. But it leaves open the question as to why the folks at RZIM, who probably were the ones who put up the website, let this error go unnoticed and uncorrected, for so long? Ah… this is frustrating!

I made contact with someone at RZIM (Vince Vitale) to discuss the academic credential issue. I report on this really good conversation, as an addendum, to a related post, published earlier this year.

Ravi Zacharias carries ministry credentials from the Christian and Missionary Alliance (C&MA). The C&MA recently concluded their investigation into the controversy. Their conclusion?

“Evidence does not provide basis for formal discipline under the C&MA policy.”

Clarke Morledge -- Computer Network Engineer, College of William and Mary... I hiked the Mount of the Holy Cross, one of the famous Colorado Fourteeners, with some friends in July, 2012. My buddy, Mike Scott, snapped this photo of me on the summit. END_OF_DOCUMENT_TOKEN_TO_BE_REPLACED
This entry was posted on Wednesday, December 6th, 2017 at 7:07 pm and tagged with integrity, Ravi Zacharias and posted in Apologetics. You can follow any responses to this entry through the RSS 2.0 feed.
« Lady Jane Grey: A Protestant Martyr
How the Reformation (Almost) Killed Christmas »