Egypt’s Coptic Christians, and the Unity of the Body of Christ 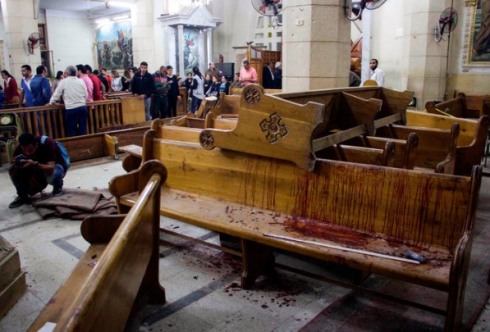 Tragedy gripped the world when Islamic State militants killed 44 Coptic Christians in Egypt, while worshippers gathered to celebrate Palm Sunday (New York Times). But a few of my Christian friends were probably wondering, what is a “Coptic Christian,” and are they really Christian?

Joe Carter, a blogger at The Gospel Coalition, has a great FAQ summary, explaining what happened, and who the Coptic Christians are. But I want to focus on answering some of the specific concerns of my friends. More importantly, I want to have you think about what it might teach us, for evangelical Christians.

Who are the Coptic Christians, and are They Really Christian?

The word “Copt” is from the Greek word for Egyptian, a 10% minority of Egypt’s population. Coptic Christians consider their church to be founded back in the very first century of the Christian era, when Mark, the Gospel writer, visited the area and first preached the Good News about the Risen Jesus.

But by the 5th century A.D., the Coptic church began to experience tension with other Christian communities in the waning years of the ancient Roman Empire. In the previous century, the great Councils of Nicea and Constantinople had agreed upon the consensus regarding the Triune nature of God, one God in three persons, Father, Son, and Holy Spirit. But these councils left unresolved the question as to how the divinity and humanity of Jesus, the Son of God, relates to one another.

In 451, another Council at Chalcedon, met to resolve the issue. The general consensus agreed in this formulation: That Jesus is one person, with two natures, one divine and one human. The great bulk of Christians today, including Protestants (like me!), Roman Catholics, and Eastern Orthodox, hold to this formulation as a signpost of Christian orthodoxy.

To the Coptic believers, the opposite was the case. The church leaders at Chalcedon themselves had fallen into error, by their own “anti-Scriptural” insistence that Christ had two natures, when the Bible taught no such thing, in their view. However, Coptic Christians and non-Coptic Christians have begun talking again with one another in recent times. Interestingly, Coptic Christians reject the label of monophysitism that is often applied to them. Instead, they would describe their position as being miaphysitism, emphasizing not one “sole” nature of Christ, but rather, one “united” nature of Christ. Essentially, the person of Jesus is one, unified, composite nature of divinity and humanity together, without separation, without confusion, and without alteration.

If one is understanding the Coptic position correctly in this matter, it could be that the Coptic view is actually not terribly unlike the Chalcedonian view. If this is the case, then the common misperception of “heresy” among the Coptic believers is actually a falsehood. Maybe, they are truly Christians, just like the rest of us!

There is quite of bit of work that needs to be done to get everyone on the same page here. Building a viable consensus among various parties, that have been at odds with one another for almost 1500 years, does not happen overnight. Working to overcome such differences, if it can be done, requires a lot of good listening.

Sadly, good listening is often in short supply these days.

Coptic Christians celebrating Christmas Eve in Cairo. Notice that they follow an ancient tradition of men gathering on one side and women on the other (photo credit: Associated Press, Amr Nabil)

What Can Evangelicals Learn From Coptic Christians?

So, what is God teaching us?

I probably should stop here, but I believe there is a lesson that has applications among Protestant evangelicals that have their own internal differences.

I could look at several examples, but let us take the complementarian versus egalitarian controversy that is dividing evangelical Christians today. One party rejects the idea of having women as elders and pastors in the church, and the other party embraces the idea of women participating in all levels of church governance and authority. One party believes that the other is buying into an anti-Scriptural view of a creeping, insidious feminism, that threatens to destroy the church and the Gospel. The other party believes that the other is anti-Scripturally denying the work of the Holy Spirit to empower women to use the gifts that God has given them.

I do not know how the “women in ministry” issue will eventually play out in the long run in evangelical churches. But I can tell you this much: Evangelical complementarians and evangelical egalitarians have a terrible track record of being able to listen to the other well. Whole denominations have been forming over the last fifty years, lining up on different sides of this issue. In the very fiber of my being, I find it to be a terrible tragedy for people who say that they love Jesus to divide themselves over this issue.

The recent tragedy among the Coptic Christian minority in Egypt, a community of Christians that most other believers in the world know relatively little about, is indeed a senseless, violent tragedy. But perhaps one good thing might come out of it. It might raise awareness among Christians all over the world that here is a people who are right in the firing line of facing deadly persecution for their faith in Christ. We may not completely agree with one another’s theology, but how much of a difference does it make that a group of families; mothers, fathers, sisters and brothers, experienced martyrdom yesterday for celebrating the triumphal entry of our Lord into Jerusalem on a Palm Sunday?

As the rest of us begin to learn more about this seemingly remote community of faith, and think about how the theological controversies of 1500 years can be possibly discussed, and worked through, to find a Scriptural consensus, how might it help the rest of us work through controversies that are more immediate to us, among the people we worship with, on a week to week basis?

Clarke Morledge -- Computer Network Engineer, College of William and Mary... I hiked the Mount of the Holy Cross, one of the famous Colorado Fourteeners, with some friends in July, 2012. My buddy, Mike Scott, snapped this photo of me on the summit. END_OF_DOCUMENT_TOKEN_TO_BE_REPLACED
This entry was posted on Monday, April 10th, 2017 at 7:21 pm and tagged with chalcedon, complementarian, Coptic Christians, egalitarian, miaphysitism, monophysitism, nicea and posted in Witnesses. You can follow any responses to this entry through the RSS 2.0 feed.
« Why Different Christians Recite the Lord’s Prayer Differently
The Beautiful Gate: Holy Week, Ezekiel, Mary, and the Return of Christ »

One response to “Egypt’s Coptic Christians, and the Unity of the Body of Christ”