Martin and the Origin of “the Chapel” 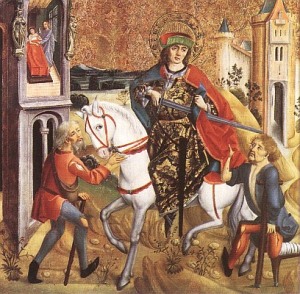 Martin of Tours cutting his cloak in half to give to a poor man. Herein lies the story of the term “the Chapel.”

In the 4th. century A.D., a young solider in the Roman army named Martin encountered a beggar one day in northern France. The beggar’s clothes were terribly worn. Martin was moved with compassion and cut his military cloak in half and gave it to the poor man.

Later that evening, Martin had an incredibly profound dream. According to one account, Martin experienced a vision, seeing Jesus Christ standing before him wearing his half cloak. Harkening back to Matthew 25:31-46, Martin is commended for giving Jesus part of the soldier’s cloak to wear. In response to this vision, Martin presented himself as a candidate for Christian baptism.

Martin had grown up in northern Italy, where Christianity had yet only a small influence in the wake of Emperor Constantine’s only recent acceptance of Christianity as a legal faith within his realm. Nevertheless, at age ten, he attended a local church against the wishes of his parents.

After being baptized as a Christian and serving for several years in military service, Martin laid down his sword and dedicated himself to missionary work and the monastic life. He made his way to the French city of Tours, where the people were so impressed with his devotion to Christ and his character that they tricked him into becoming the bishop of Tours. Martin had been urged to visit a sick person, only to arrive at the home greeted by a crowd demanding that he become their leader. The stunned Martin was not seeking this position, so he fled and hid himself in a barn full of geese. When the crowd found him, he was duly anointed as bishop as he smelled of geese manure.

Martin of Tours went on to become a great evangelist for the Christian faith, challenging the local pagan shrines with the confidence of an Elijah and opposing false teaching within the church, exemplified mostly in his time by the popularity of Arianism, a movement started years earlier by the heretic Arius who denied the full divinity of Jesus as the Son of God coequal with the Father, not too much unlike what modern day Jehovah’s Witnesses believe.

Nevertheless, Martin opposed the popular practice in his day of condemning heretics to death, preferring instead to use the art of persuasion to bring them to repentance. Magistrates dreaded seeing Martin, as they knew that the popular bishop would come and visit them, entreating them to release their religious prisoners. The magistrates felt so bad about possibility disappointing this godly man that they had to let their captives go.

After his death, Martin has been most remembered for the story of the cloak. The other half of the cloak he had kept became a medieval relic that was passed down from generation to generation, eventually in bits and pieces. This half cloak was considered to be a small cape, which was then kept in a small building called a cappella, in Latin. The priest who was in charge of the small cape relic was called a cappellanu. Later, as Saint Martin of Tours was declared to be the patron saint of the military, a cappellani was any priest who served in the military, which is the French root of the English word chaplain.

Parts of Martin’s cape were distributed in cappellas all throughout Europe. Over time, small churches like these were eventually called chapels, though the association with Martin’s cloak was eventually lost, particularly as Protestants began to reject the practice of venerating relics. Nevertheless, “the chapel” terminology has continued to be used, long after the remains of Martin’s cape decayed away.

The next time you go to “the chapel,” you might remember Martin and his famous cloak, part of which he gave to that poor beggar.

Clarke Morledge -- Computer Network Engineer, College of William and Mary... I hiked the Mount of the Holy Cross, one of the famous Colorado Fourteeners, with some friends in July, 2012. My buddy, Mike Scott, snapped this photo of me on the summit. END_OF_DOCUMENT_TOKEN_TO_BE_REPLACED
This entry was posted on Friday, June 13th, 2014 at 6:55 pm and tagged with chapel, martin of tours and posted in Witnesses. You can follow any responses to this entry through the RSS 2.0 feed.
« Oliver Cromwell’s Crisis
Alone Yet Not Alone: Reflections on a Much Needed Film »