A Harbinger of Typology Gone Awry? 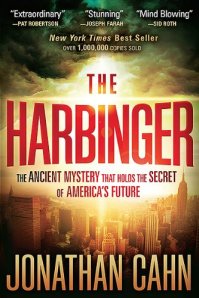 “Have you read The Harbinger?” The wife of the elderly couple in the restaurant asked me with great curiosity and concern. “I am not sure what to think of all of it, but it sounds like a prophetic warning for America!”

Sometimes going out to lunch can get you into trouble. As we were finishing up a meal with some friends and getting ready to leave, this couple at another table wanted to have a “conversation” with me. Well, it was more like a monologue than a dialogue. I was thinking that this would be brief, as my wife and friends had already left the restaurant, but this couple just kept going on and on about this “Harbinger” book, among other topics. I needed a rescue but there was none to be had. My wife was understandably upset, by this time waiting on her crutches outside the restaurant. After I finally left the couple as they were still in mid-sentence, I was sorely rebuked by my wife for leaving her stranded in the parking lot, after she had recently undergone foot surgery. Ouch. I had messed up. Boy, was I in trouble!

But I was not the only one in trouble. As I did a little more research later into The Harbinger, I realized that there are probably a lot more folks in trouble!

You see, I do not have cable TV, so I’m am pretty clueless about what passes for pop culture and the round-the-clock news cycle these days. But apparently, a Messianic Jewish pastor, Jonathan Cahn, has written a blockbuster novel, The Harbinger: the Ancient Mystery that holds the secret of America’s Future. As of late June, 2013, after 75 weeks on the New York Times Best Seller list under the paperback trade fiction category, The Harbinger, sat at #19. That is quite remarkable for a book written by an evangelical Christian author.

Now, the book may indeed be a great story if you like that particular genre, mixing non-fiction into primarily a fictional story. The problem is that it is sometimes hard to figure out the line where the non-fiction ends and where the fiction begins.

One particular Christian ministry, the Berean Call, charges that Jonathan Cahn has taken some liberties with the Scriptures that are not warranted. The Berean Call, though not immune itself to controversy, received a response from Jonathan Cahn stating that The Harbinger has been “endorsed, praised, and hailed” by “experts in biblical hermeneutics“. What is the controversy and what does one make of it?

The study of prophecy generates much vivid discussion among students of the Bible. But it is important to understand the nature of prophecy in particular as to how the Old Testament relates to the New Testament. One of the most crucial ways for understanding prophecy is through the use of typology in Scripture. Jesus, as the Son of Man, represents a number of different types or antitypes of themes presented repeatedly in the Old Testament. For example, Jesus is an antitype of Israel. Whereas Israel in her arrogance is disobedient to her calling, Jesus is obedient to the calling given to the nation of Israel. Jesus does what Israel was not able to do.  Therefore, Jesus is in that sense fulfilling prophecy concerning ancient Israel.

This may sound well and good, but how do you avoid misusing or overusing typology in biblical interpretation? While respecting the original and immediate context of the Old Testament text we are looking at, we must take note of how the New Testament applies repeated themes in the Old Testament text with respect to the fulfillment of prophecy in the New Testament era or future period of time. Hopefully, here on Veracity we have seen these principles at work, but how does this standard apply to The Harbinger?

The central passage of Scripture built around Cahn’s novel is Isaiah 9:10:

The bricks have fallen,
but we will build with dressed stones;
the sycamores have been cut down,
but we will put cedars in their place.

The original and immediate context for the passage is concerning Isaiah’s warning to the Northern Kingdom, as evident from reading verses 8 to 21. Here is the lead in at verses 8 and 9:

The Lord has sent a word against Jacob,
and it will fall on Israel;
and all the people will know,
Ephraim and the inhabitants of Samaria,
who say in pride and in arrogance of heart (ESV).

In the 8th century B.C., the Northern Kingdom of ancient Israel, which includes Ephraim and Samaria, have been attacked by the neighboring nations. However, Israel stubbornly refuses to repent of her idolatry and so God promises that judgment will come to the land. So while the “bricks have fallen” in their villages, they are arrogantly determined to rebuild even better with “dressed stones“. Eventually, the Northern Kingdom is wiped out by the Assyrians. Even though God has a covenant with His people, this does not mean they will not escape his judgment. We must wait for Jesus the Christ to come hundreds of years later to finally make things right with the covenant promise to Israel.

Jonathan Cahn acknowledges that the original context for this biblical covenant is with ancient Israel and not with modern America. Nevertheless, he argues that Isaiah is giving us an “ancient pattern of judgment [that] is now recurring in America, and in a stunningly precise way – and that God is able to use such patterns and signs to warn America, a nation in rapid moral spiritual apostasy and in danger of judgment.” “The bricks have fallen” refers specifically to the 9/11 tragedy. According to Cahn, God has brought a series of “signs”, or harbingers, that communicate the same sense of judgment upon America. Cahn argues that while the modern situation is not technically a prophecy in the same sense as it was in ancient Israel, there is something still important that God wants to teach us here.

However, if Cahn is really trying to make a distinction between ancient prophecy and future “harbingers”, then I am not so sure that the promotional editors at Charisma, Cahn’s book publisher, got the memo:

Mmmmm. It is difficult for me not to believe that Cahn is trying to use typology, identifying modern day America as a pattern following ancient Israel, along same lines as how the New Testament writers interpret the Old Testament. There are several problems with this: Where does Cahn make the connection between ancient Israel and modern America? How can it be that “the bricks have fallen” refers to 9/11 when we already know that the original context specifically addresses something in the past a few thousand years ago? Is there something in the New Testament that uses this theme as a repeated type or “sign” to somehow represent America? Where is America even mentioned in the Bible? Simply put, I see no biblical reason to replace “Israel” with “America” in Isaiah 9:10 in the manner as Jonathan Cahn is suggesting.

Some may object and say that America is in deep trouble today, and  that Cahn is simply trying to wake people up with the call to study the prophetic message of the Bible.  I would very much agree. But is Cahn in deep trouble himself as he attempts to handle the biblical text?

Does America still need to repent and get right with God? Absolutely. Just like every other nation on earth. If there is any similar theme in the Bible, it is the message of Jesus proclaiming that the Kingdom of God is at hand. It is a message of repentance that is applicable to all peoples, not to just one nation. Are there harbingers that apply to America today? Absolutely…. and to Canada, Mexico, England, Russia, Uganda, Indonesia, China… the list goes on and on:

The times of ignorance God overlooked, but now he commands all people everywhere to repent, because he has fixed a day on which he will judge the world in righteousness by a man whom he has appointed; and of this he has given assurance to all by raising him from the dead (Acts 17:30–31 ESV – my emphasis)

There is a great debate today as to whether or not America is a “Christian nation”. Perhaps the themes in this book taps into this debate. But when we are tempted towards some type of “replacement” theology that pulls America, or any other modern nation-state into biblical focus, instead of God’s people as we find through Old Testament Israel, the real truth of Israel’s revelation can get obscured. And when that happens, confusion results and people can get into real trouble.

This unfortunately makes the job of the Christian apologist harder than it really needs to be. Defending a form of American “Zionism” as something taught as a “pattern” or “sign” in Scripture can take us down a very long rabbit hole indeed.

Fact or fiction? I’ll let the reader of brother Cahn’s work be the judge. Perhaps I have misunderstood the author of The Harbinger incorrectly, but the real danger is that by effectively identifying America with Israel, the ideas pregnant in this popular book abuse a typological approach to prophecy and distract the reader from understanding who and what Israel really points to: Jesus.

Clarke Morledge -- Computer Network Engineer, College of William and Mary... I hiked the Mount of the Holy Cross, one of the famous Colorado Fourteeners, with some friends in July, 2012. My buddy, Mike Scott, snapped this photo of me on the summit. END_OF_DOCUMENT_TOKEN_TO_BE_REPLACED
This entry was posted on Thursday, June 20th, 2013 at 2:27 pm and tagged with Acts 17, Isaiah 9, Jonathan Cahn, prophecy, Son of Man, The Harbinger, veracity and posted in Topics. You can follow any responses to this entry through the RSS 2.0 feed.
« City of David
Rosaria Butterfield – Hospitality and the Unlikely Convert »

6 responses to “A Harbinger of Typology Gone Awry?”